Leonard Bower fondly recalls bouncing up and down in the passenger seat of his dad’s 1969 Diamond Reo cabover. He’s known the route from Pennsylvania to Texas since he was 12. “We rode there and back six times in one summer,” the Harrisburg, Pa., native says. “My love for traveling developed out of those rides.”

By age 24, he bought his first truck, a 1977 Kenworth A, and was eager to see the rest of the country. “Back in those days I couldn’t stay out long enough, Bower says. “I was very adventurous. I had to see what was around the next curve.”

That love of travel included going around curves on Harley-Davidson Dressers for many years. He owned four new ones between 1987 and 1992, even honeymooning on his Hog in 1992 with his bride, Jill Bower, out West.

“For five years, every year, we’d go out West for three weeks and get on the back roads,” Bowers said of he and his wife’s motorcycle trips. Eventually Jill bought her own Harley. “People thought we were crazy. Oh, yeah, we loved it.”

Now that he and Jill have three children – and have sold their Hogs – Bower values his time at home. When he took a long-haul lease with Mercer Transportation last year, it took a toll, he says.

“The longest I was away was two months – April and May – with only three days at home,” he says. As his most lucrative freight routes began dropping, Bower re-evaluated priorities. This September, he took a job hauling regional loads of steel coil and plates for Rushville, Ind.-based Fraley and Schilling, at a time when few companies were hiring.

His longtime friend and owner-operator colleague Sam Young says he understands why. “His overall knowledge of trucking is what’s gotten him this far.”

Though Bower enjoys his home time, he also appreciated last year’s long hauls. “You get a level of knowledge that you can’t really get out of a textbook,” Bower says. “You get to experience different accents, different foods, how the locals have laid out their back roads.”

The allure of the open road wasn’t the only reason Bower wanted to become an owner-operator at a young age. “The other enjoyable aspect, especially from a young guy’s perspective, was handling a large piece of equipment,” Bower says. “There’s a sense of satisfaction there.”

The 52-year-old, sporting a tucked-in green twill shirt, says that a large part of maintenance means keeping a truck sparkling: “If it’s clean and shiny, in my book, it’s a nice looking truck.”

When he was leased to Pyle Transport from 1995 to 2005, he represented the company at truck shows along the East Coast to help recruit owner-operators. “Pyle transport recognized his ability to work with people,” Larry Hess, sales manager at Midway Trucks, says of Bower, who has done business with Hess since 1988 when he sold Bower his first Western Star.

An immaculate truck is a small part of Bower’s larger penchant for keeping customers. “I am intentional in the way I speak to people and the way I dress,” he says, in a clipped Pennsylvanian accent. “In our industry we make first impressions daily – sometimes even several times in one day.”

To lower fuel and other costs, Bower plans routes carefully and is frugal with trim on his rig. “I don’t think it’s advantageous from the financial end to put a lot of stuff on that you don’t get back.”

He manages his own finances, always keeping copies of records in his truck. Every month’s receipts go in an envelope, with purchases written on the front, he says: “It is imperative to know your fixed costs. Then you must learn to anticipate your variable costs, and you must always live within your means.” He netted $60,000 last year.

He credits being accident-free for 31 years to his practicality and faith. “I give Christ my full credit for that,” he says. “When you mentally decide you want to be safe, you will be safe.”

Since Bower’s return to regional hauling this September, he has helped build a youth room onto his church, Redland Valley BIC, where he has served as a trustee for seven years. Such involvement “is a true testimony to his faith in God” and dedication to his community, says Dale Lance, youth pastor at Redland Valley.

1995: Leased to A. Duie Pyle Transportation

2009: Leased to Fraley and Schilling

BOWER AND HIS WIFE Jill Bower drove team on a dedicated run from Pennsylvania to California each week from 1993 until 1996. “We’d leave Monday, be there Wednesday and be home by Friday,” he says. “We made $750,000 in three years.”

THE NEEDY in Bay City, Mich., got help from Bower this summer when he, his family and other members in his church took up hammers and nails to build houses. 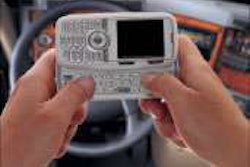 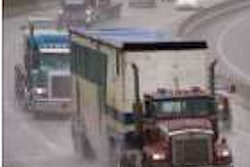 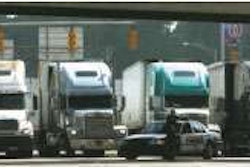 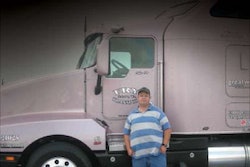