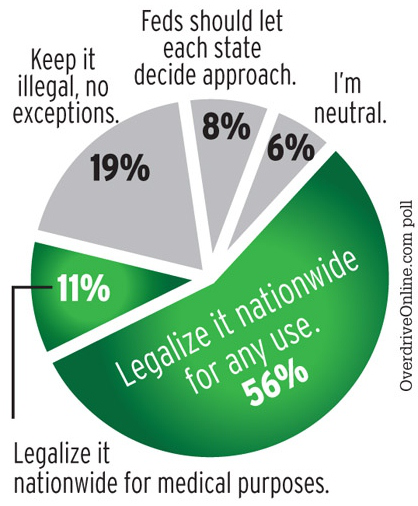 Approaching this month’s national election, Washington, Oregon and Colorado all have measures on the ballot that go beyond the now somewhat common practice — codified in 17 states — of legalizing marijuana for medical use. The three ballot initiatives would make certain quantities of the drug legal to sell for use beyond medical purposes.

In large part, Overdrive readers favor some form of legalization, with a majority even endorsing the expanded freedom on the Western states’ ballots this year. This reflects the national trends, as other states consider laws liberalizing pot use. An additional seven states had legislation pending for legalizing medical marijuana.

“If people would examine the drug … they would see it’s a very good drug for arthritis, headaches, cramps from menstrual issues, cataract pain, and on and on,” wrote owner-operator Don Lanier in comments here at OverdriveOnline.com. “Too many people still believe the reefer-madness-style propaganda against this plant. Marijuana should be legalized and taxed and sold to those 21 and over for recreational and medical use.”

Among the commentary, a recurring theme was the deleterious societal effects of the four-decades-old “war on drugs.” Its stiff penalties have, many argue, trapped otherwise minor offenders in a culture of criminality, oftentimes from a young age.

“I remember when President Richard Millhouse Nixon declared the ‘war on drugs,’” wrote Paul J. Laperriere, Pierson, Iowa-based owner of Big Boyz Trucking. “People laughed at it then, and people laugh at it now. We are further behind now than we were when it first started. All we have done is make criminals out of our own citizens.”

“The war on drugs has been lost long ago,” Lanier added. 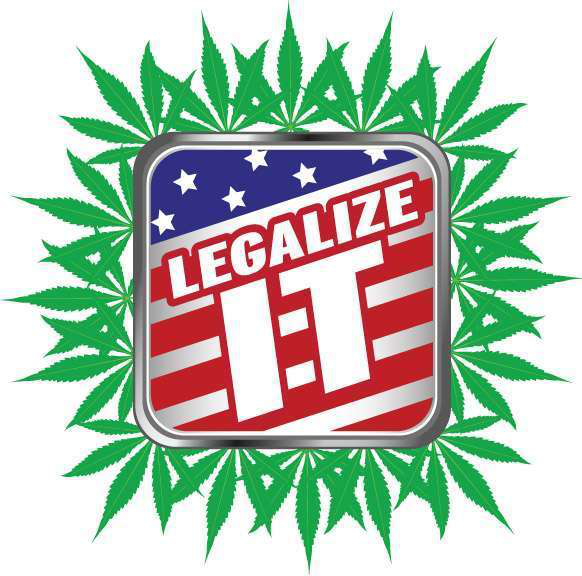 Not all commenters were for legalization, of course, but common ground existed in treating prohibitions on use while driving with strict penalties. “Driving while impaired from any substance is very dangerous and irresponsible,” noted Ralph Burket, summing up the sentiment.

Following find selections from commentary on both sides of the issue either posted to our Facebook page or on OverdriveOnline.com.

Legalize it!
Billy Richardson: The government should have no say-so in what one puts in their body. That’s what freedom is — to have liberty over what affects oneself.

Shelle Lichti: Go figure. Something natural that has proven benefits is illegal, but alcohol, [which] does far more harm, is legal.

Jason Lerato: Legalize it all the way.

Anthony Brandmeyer: Legalize it and tax it, and put the same rules on it as alcohol.

Nelson Santiago: Legalization opens the door to taxation. “Decriminalization” is more like it. I don’t smoke it myself, but I’ve never seen anyone die from smoking it. Unlike cigarettes.

Keep it illegal!
Robert Pulliam: The only reason they legalize it is so they can tax it. If they thought drunk drivers were bad, wait until the masses are all high on weed.

Lawrence Jay Harrod: We have enough idiots in this country without adding to the collective.

Brenda Miller: We have had medical marijuana here long enough that I can say for a fact most people just look for an excuse to ask their doctor for a prescription. If I were hiring, I would not hire anyone with a prescription for pot. Let them sue me. It’s a state law, not a federal one, and I as a boss have a right to say it isn’t safe. Sad part: My dad, who could use it for pain, doesn’t because of the fact that it isn’t federally protected.

Vote in Overdrive‘s monthly Hot Buttons poll via our main site. This month, we’re probing how exactly to deal with the “fiscal cliff” of automatic tax increases and spending cuts scheduled to go into effect at the beginning of next year if Congress and the President can’t come to some sort of compromise on the deficit. Weigh in on your preferred approach here.