LETTER: Do unto drivers as you would have done unto you

Many drivers call me for prayer because of the way they are treated. Too many shippers and receivers do not provide restrooms. We are treated like cattle — no overnight parking, long waits for loads either to pick up or deliver.  Many times I myself have waited some 30 hours or more for a load.

The Bible says to treat others as you want to be treated — we sure are not. You can be nice, polite and courteous and still be treated like an animal. I had a recent delivery to Dallas, Texas. First, we were given the wrong address and the wrong phone numbers, and when I finally got to the wrong place they gave me directions to where I was to deliver, and it was still wrong. After a 9-mile round trip to get back to the first incorrect place, I still was no closer to finding the receiver. Finally, one of the company’s own security officers spotted the errors and as a result he was polite enough to escort me to the correct location – there was no street address posted there at all.

To top it all off, it was already 10:15 a.m., and I had a second drop due at noon, standing in front of a desk waiting for them to assist me and take the paperwork for the load. Fifteen minutes went by before they acknowledged I was even there. Then, as I sat there watching and listening in wait to unload, I was amazed by the attitudes of the workers, treated like cattle as far as I was concerned. Time kept on going by; they were all talking about some scanning problem from a different department, which had nothing to do with them or their job. It would not have been so bad but that it took them all, everyone stopping everything they were doing to chat about this instead of talking while they were working.

I finally was getting a little concerned for the time, and I went up and excused myself and asked them how much longer it would be, for I had a second drop at noon and still had 30 miles to drive. I was snapped at and told “sit down, we’ll get to you soon.” Finally, after more than an hour, they took my paperwork and gave me a dock number to go to. They told me that after 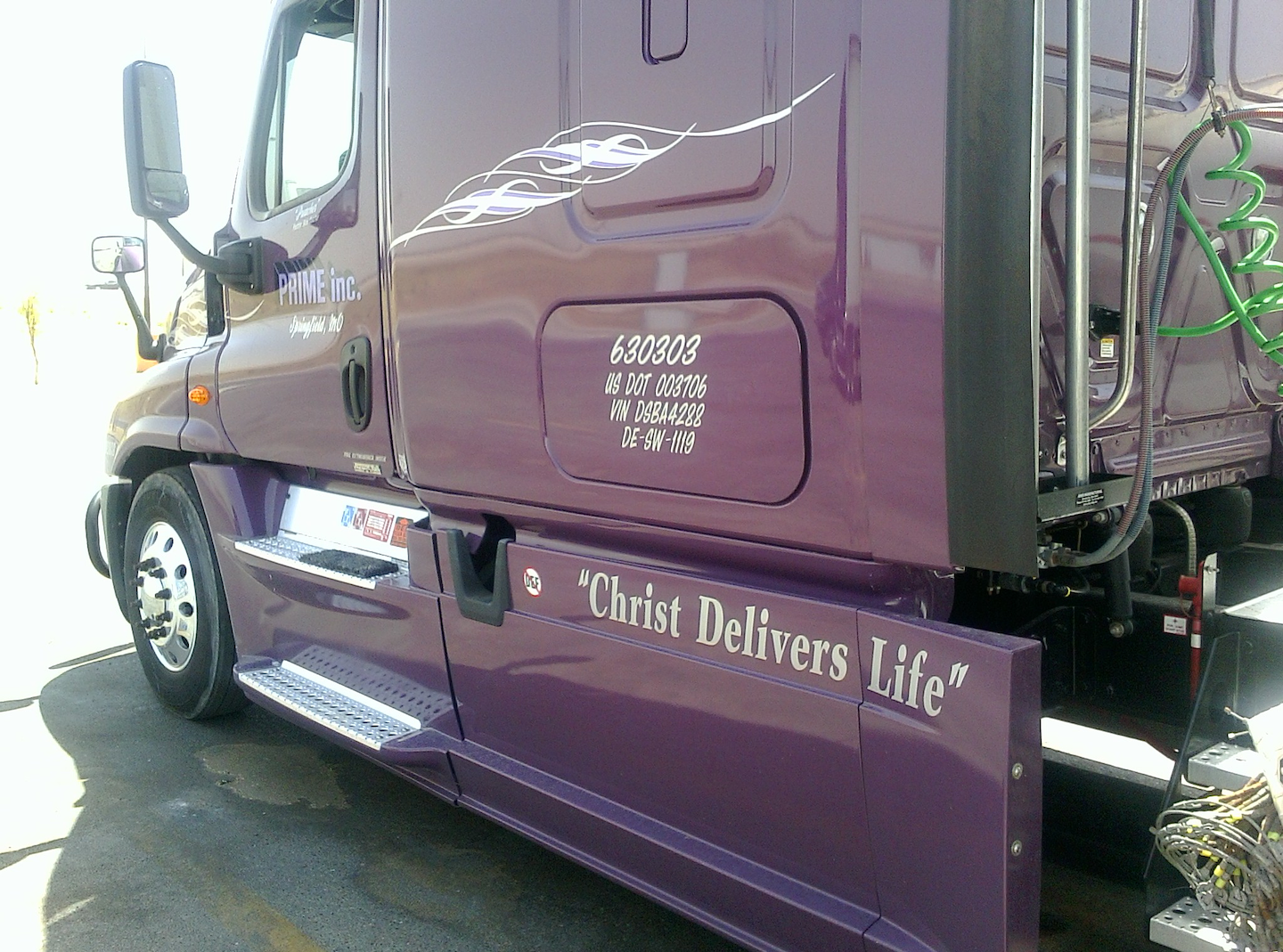 Letter writer Bob Sauter’s third truck leased with Prime Inc. is this purple 2013 Freightliner Cascadia, lettered in part with the message of the pastor’s Sunday call-in CDL Drivers Church of Delivery. Read more about it here.

docking to come in, I should open the door and set the ramp. As a person who has been in management, I well knew the liability for a nonemployee would not cover that if an injury were to take place.

This was just a mild situation. I could go on about more, and some were total nightmares, to say the least.

Bottom line is we need help to make changes so drivers are not treated like animals and we can deliver or pick up from safe, friendly staffs and locations. It’s hard enough out here to make a living, and when we don’t drive there is no revenue. Shipper and receiver staff get to sit and procrastinate and they still get a paycheck. Drivers do not. –Bob Sauter, Driver and Pastor, CDL Drivers Church of Delivery