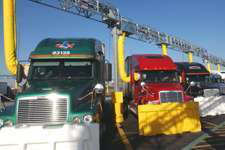 Each company offers some electrification service, such as heating and cooling, but what and how they offer services varies and can include Internet, cable and block heater power.

Tennessee-based IdleAire expects to launch up to 30 locations offering electrification and other services at truck stops during the next 60 days, said CEO Mike Fielden.

IdleAire’s parent company is New York’s Convoy Solutions. Earlier this year, a small group of investors bought IdleAire, which has had at least 131 locations in 34 states.

The first new locations will begin opening in early July, starting with Salt Lake City’s Sapp Bros., and some Pilot Travel Centers. Other sites are expected to open in North Dakota, Minnesota, Tennessee, Missouri, California and Georgia. Additionally, truck stop owners have committed to or expressed interest in five additional locations in Texas, Arkansas and Pennsylvania.

IdleAire hasn’t received federal and state grants, which have been important in creating past sites. It plans to have a contact person at each site during high usage times to provide customer service and troubleshoot problems.

IdleAire hasn’t reached an agreement with TA, although it has equipment remaining at 98 TA corporate sites. TA said in May it expected to remove equipment from its company-owned locations. However, IdleAire has reached agreement with some franchise TA/Petro owners to restart services.

The user cost is less than $2 an hour. Customers can use their old IdleAire window adaptor, which also can be purchased at locations for $15.

IdleAire closed Jan. 29 after its owners of the previous 18 months didn’t find a buyer. They had acquired the company after it declared Chapter 11 bankruptcy in 2008, which was converted to Chapter 7 a year later.

The grant will finance services for about 25 to 30 trucks per location at truck stops and rest areas that are privately owned or operated over the next two years, said Alan Bates, Shorepower’s marketing and strategic development director.

Most of the DOE-funded locations will be along Interstates 5, 80, 10, 20 and 95 and more concentrated in California because of its strict idling laws. Some of these spots will offer plug-ins for reefers, as well.

Shorepower, formerly known as Shurepower, has set its goal to launch an additional 25 locations over the next two years. It currently can accommodate 300 trucks at six locations in Oregon and Washington and one in North Carolina

In April, the Arizona Department of Environmental Quality awarded $2.15 million to Shorepower to install 150 truck electrification units at truck stops in southern Arizona.

It costs $1 to start the service and $1 an hour. Shorepower also offers Internet and other services.

The cost is generally $2 an hour but fees are up to the site owner and everything is provided to operate the equipment, Lavelle said.

Currently, CabAire services, which include electrification and other amenities, are offered at 44 spaces in Salisbury, N.C.; 28 spaces at New Stanton Travel Plaza on the Pennsylvania Turnpike and 116 spaces at North Stonington, N.C.

CabAire will provide the first truck stop electrification at a U.S. port, starting in September at the New Haven (Conn.) Port Authority with 14 spaces. In July, 50 spaces will open at the Delaware Welcome Center on I-95.

Also slated are 24 spaces at the Smyrna Rest Area, also in Delaware, and 86 spaces on the New Jersey Turnpike’s Vince Lombardi Plaza.

The hourly cost is about equal to a gallon of diesel at the location where CabAire is used, but unlike fuel prices, service fees will probably only change a few times annually. No special equipment is required.

In June, Florida officials announced JR Enterprises was awarded a contract to provide, operate and maintain 20 truck stop electrification spaces each at the Okahumpka and Canoe Creek service plazas on the state’s Turnpike. Construction is scheduled for completion by Aug. 31. More information wasn’t immediately available.