Dan Sobic, executive vice president of Paccar Inc. said a recovering truck market will demand the highest levels of quality and cooperation from vehicle and supplier manufacturers, in an opening presentation at the inaugural Commercial Vehicle Outlook Conference at the Great American Trucking Show in Dallas Aug. 25.

Paccar’s focus on quality and operational improvement through programs such as Six Sigma, Sobic said, are fundamental to the company’s success. These same commitments are necessary from the supplier base, especially as the market strengthens and production increases.

Regarding delivery, Sobic said, “If there’s one message I can leave you with from the parts aftermarket business, it is not ‘location, location, location.’ It is ‘availability, availability, availability.’ ” He said as truck production ramps up, Paccar is looking to its supplier base to provide a 97 percent fill rate. “We are taking steps to increase our parts inventory goals to ensure that our customers will have the part when it is required.”

While North American truck sales continue to struggle, Sobic noted Paccar’s aftermarket performance was strong. He said Paccar Parts grew by 7 percent year-over-year with $1.9 billion in revenue. The parts division operates 13 global distribution centers and has implemented new technologies such as a voice recognition system that provides a 30 percent improvement in pick productivity and error reduction of 1 in 40,000 lines picked.

“Suppliers have asked us if we are willing to share these technologies,” Sobic said. “The answer is a resounding ‘yes.’”

Sobic also discussed the company’s development and introduction of its new lineup of MX engines that use selective catalytic reduction to achieve the 2010 U.S. Environmental Protection Agency emissions standards.

“When we bought DAF in 1996, many in the European press asked why?” Sobic recalled, noting the company was in bankruptcy and not noted for high-quality products. The appeal, he said, was the company’s experience in global engine manufacturing with more than 900,000 engines produced in 50 years.

The acquisition, bolstered by a nearly $1 billion investment, laid the foundation for the company’s new lineup of Paccar MX engines. Sobic said the engines have undergone more than 300,000 test hours and more than 50 million North American test miles. The feedback from customers, he said, is improved fuel economy, quiet operation and ample pulling power. The engines are EPA/CARB 2010 certification in all 50 states.

When asked if the company has any plans to introduce engines with exhaust gas recirculation technology, Sobic responded, “I think we are very comfortable with our SCR strategy.” 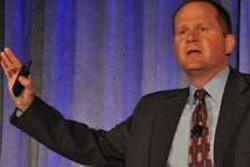 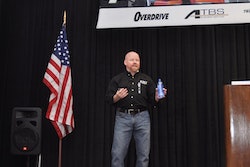