Independent owner-operator Martin Jez, based in Galt, Calif., in anticipation of a slow period for flatbed, considered leasing to a carrier last year.

Recruiters repeatedly told him that his Pre-Employment Screening Program report was problematic. One carrier told him his Compliance Safety Accountability score was in the neighborhood of 300, and he was denied a lease because of it. His business partner – and wife – subsequently obtained a copy of his PSP report and had “no idea how they got the score number,” she says.

Jez didn’t either. Their one-unit A.M. Jez Trucking had suffered only a single out-of-service incident, and its carrier profile in the CSA Safety Measurement System showed no percentile ranking (or “score”) in any of the five public Behavioral Analysis and Safety Improvement Categories (BASICs). As of press time, in fact, it showed only four inspections and no crashes.

Where did the score come from?

That’s an increasingly common question with an often complex answer. It can be explained by seeing how carrier recruiting and qualifying procedures have changed since the advent of CSA and the related PSP program in 2010.

FMCSA has pounded with official gusto on the fact that drivers have no public “scores,” ever since plans to release Driver Safety Measurement System numbers hit the wall of consumer privacy law in the program’s infancy. Nevertheless, third-party services since have made an effort to outsource the computational work and approximate such rankings to give carriers a way to rank the CSA performance of their drivers. One company even has taken such a service straight to drivers themselves.

If your record is good, these scores can help you. If your record is tarnished unfairly, it will require your attention to fix it and ensure that your career is not jeopardized by the increasing attention paid to an ever-expanding database of inspection and crash records.

PSP sets the standard
PSP reports in their basic form are the only complete option for both carriers and drivers when it comes to analyzing and/or verifying inspection and crash information associated with a driver. The PSP report is the only place to find a full driver-specific detail – three years’ worth of inspection data, five years for crashes – of the information contained in the Motor Carrier Management Information System database that underpins CSA.

Interest in the PSP has grown significantly since its launch in mid-2010. Since then, the number of carriers using PSP in driver qualifying has quadrupled to about 8,000 subscribers, says Elizabeth Pemmerl, PSP general manager for Kansas-based NIC Technologies, the contractor administering the program for FMCSA. Every month, roughly 10,000 drivers request their own records. Some return frequently, knowing that the report updates monthly.

Some carriers use PSP on the front end of the recruiting process, as appears to be the case at the companies that denied Jez an opportunity to lease. Checking driver PSP reports during hiring ranked second, after only a check of the Commercial Driver’s License Information System, in a recent survey conducted by HireRight, well-known as the compilers of driver DAC Reports. More than 80 percent of recruiter respondents reported checking drivers’ PSP reports during the screening process, a check above and beyond the bare minimum required by law.

Carriers across the nation know that information in PSP reports could indicate patterns of behavior that could impact their own CSA scores in the future, and if a driver is not aware of what exactly is on his PSP, he’s ignoring it at his own peril.

“I talked with some of our customers who are ordering our products in phases” when background-screening a driver, says Kent Ferguson, HireRight’s director of transportation solutions. “They’ll order a [Motor Vehicle Record], check CDLIS and our employment history file [DAC Report] upfront, then they’ll move to PSP.”

Carriers often check the PSP earlier in the process, Ferguson said, to see employment history. They’re also phasing out drivers who have too many inspections or crashes.

At Springfield, Mo.-based Prime Inc., John Hancock, director of driver recruiting, says they look at PSP reports late in the hiring process. “Some order the PSP before they do anything else,” he says. “Listening to some of my peers, they look at it as a disqualifying machine.”

Consequently, it can be critical for company drivers and owner-operators applying for a new job or a lease to verify the PSP. Carriers are required under Fair Credit Reporting Act rules to provide drivers a copy if they use it to make an adverse hiring decision, so Jez got his first look at his via a carrier he’d applied to lease with.

Jez’s PSP showed he’d been flagged with an out-of-service violation when in 2011 an officer at a scale in Cottonwood, Calif., found a chafing but intact brake hose on his flatbed and marked it as needing a fix.

“That was the only reason he told me he wouldn’t put a sticker on my trailer,” Jez says. “I fixed the hose and went back, and he put a sticker on the trailer.” It was not an out-of-service order as Jez understood it, and Jez didn’t get a ticket.

While consumer credit reporting agencies are required to offer free copies of reports annually, commercial drivers don’t get the same consideration with the PSP outside of the hiring process.

Getting a current PSP before making a job application costs a driver $10, paid to NIC. It can be done for free only by making a Freedom of Information Act/Privacy Act request for the information contained on the report, though response time is much longer. A suit filed by the Owner-Operator Independent Drivers Association earlier this year alleges FMCSA should be in fact subject to the Fair Credit Reporting Act.

FMCSA suggests that the existence of the Privacy Act and Freedom of Information Act is sufficient to satisfy FCRA rules concerning consumers’ free access to information being collected about them.

Sources with the HireRight company – which is subject to FCRA rules with its DAC Report employment history files – felt that FMCSA and NIC Technologies, administrator of the PSP service, are not acting as credit-reporting agencies. Rather, FMCSA and NIC are shifting the burden of FRCA responsibilities onto the companies utilizing the reports.

“If the prospective employer uses the PSP report in whole or part to make an adverse hiring decision based on the PSP report, they are required to provide the consumer with a copy of the report,” HireRight sources say.

Commercial drivers in some ways have been hung out to dry relative to the PSP. Since “neither FMCSA nor NIC are operating as a consumer reporting agency, the other free report situations do not apply to them,” HireRight sources say.

Trucking Law: Your remedies when a fleet blacklists you 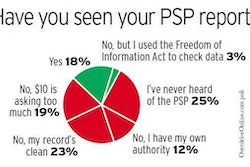 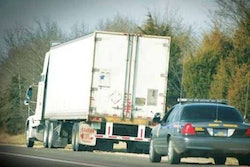