Invasion of the critters, take two

The saga continues. I can’t begin to tell you how distracting it is to have an unknown beast loose in the walls of your home. It’s like having a giant fly in the cab of the truck, only a giant fly you can’t see that only makes noise when you’re trying to sleep. Or work. Or go to the bathroom. Or anything else that requires quiet and concentration. (Don’t even act like you don’t perform better in the bathroom if it’s quiet and you can concentrate.)

George is going to break down and cut a hole in the back wall today, to set the traps inside. He’s caught every barn cat we have, but the elusive wall-beast has yet to be tricked by the delicious aroma of tuna wafting around the outside foundation of the house. I named the monster ‘Josephine’, because my Dad told me a long time ago the first order of business in war is to know your enemy. So I named her. And from my auditory observations, she’s a 900-pound weasel/swamp rat/possum mix with a proclivity for drywall. She’s also a genius, because she chose the one and only wall in the house without an indoor access panel to crawl up in. I theorize she has some sort of Star Trek transporter, because I can’t for the life of me find a hole anywhere big enough for her giant ass to fit in. She’s smart, and huge and beaming herself in and out of my life for the sole purpose of driving me crazy.

As stressful as it’s been being alone in the house during the day with a face-eating beast in the walls, I realize it’s probably better there haven’t been witnesses to my desperate conversations with Josephine and the wall she inhabits. I have begged and pleaded with her to leave, threatened to burn the house down with her in it, and attempted negotiations for her surrender to no avail. (In retrospect, I should have named her “Budget,” because I’m literally ready to destroy the entire house in order to win.)

I’m about to give in and let Josephine have the house, because I’m ready to be back on the road. I’ve officially diagnosed myself with “diesel in the blood” because I’m exhibiting the symptoms of “home time weariness.” These include: crawling into the bunk of the truck to sleep when you have a perfectly good bed in the house, because you can’t sleep without the purr and hum of an engine any more; actually craving the breakfast bar at Iron Skillet; and having chest pains from the intense desire to ride high in the sky when you watch trucks rolling down the highway from the lowly seat of your four-wheeler.

Roll on, big trucks. And feel free to stop by and give Josephine a ride. To anywhere. 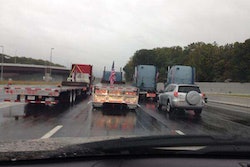