Federal authorities are investigating former Pilot Flying J President Mark Hazelwood over his potential involvement in the fuel rebate withholding case that has rocked the company the last year and a half, according to WBIR out of Knoxville, Tenn.

The outlet is reporting Hazelwood has received a “target letter” from prosecutors. The letters inform people they are being investigated and that there is evidence against them, WBIR reports.

Hazelwood resigned from the company in May, presumably in the wake of the federal allegations that the company defrauded trucking company owners out of millions of dollars in owed fuel rebates over nearly a decade-long period.

Federal agents raided the company’s Knoxville headquarters last April to confiscate documents and evidence. Since the April raid, 10 Pilot employees have pleaded guilty to fraud and conspiracy charges, and others in high-level positions were either fired or resigned.

Pilot owner Jimmy Haslam has maintained he knew nothing about the fuel rebate withholding scheme, and WBIR reports he has not received a target letter

Pilot reached a settlement with prosecutors in July, agreeing to pay $92 million in fines and to compensate victims fully. The settlement protects the company from any further criminal action, but it does not protect any individuals from prosecution.

In addition to the criminal settlement, Pilot reached an $85 million civil settlement last November, agreeing to pay 5,500 trucking companies the money it allegedly cheated them out of, along with 6 percent interest and court costs and attorney’s fees. 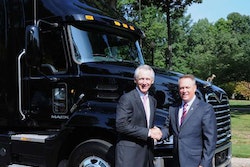 Mack to continue sponsorship of ATA’s Share the Road program