Cadle Trucking, Augusta, Ga.
In early September, owner Ben Cadle was for the first time on the verge of hiring a driver outside of the 50-mile radius around his center of operations in Augusta. Traditionally, given the hands-on nature of his maintenance operation to control costs and enhance peace of mind, “my driver selection is limited to this area.” That can be a “huge problem for small carriers” such as his. “You only have a certain pool to pull from.”

He’s also limited by an insurance-driven stipulation from Bennett Motor Express, where his fleet is leased, that no hires can be made without demonstrating two years of flatbed experience. He’s relied a lot on word of mouth and referrals. He offered a $100 referral bonus for a time, but has since experimented with a billboard near Augusta. When that drove little interest, he moved the signage to a locally operated tractor-trailer. “I got a lot of responses to that,” including a solid hire with about a year’s tenure at the company now.

Cadle also has used his personal Facebook profile to advertise open positions to his trucking friends. It provided his initial contact with the last driver he hired in his area.

Percy Transportation, Mt. Prospect, Ill.
Suburban Chicago-based Percy Transport owns four trucks and works regularly with 10 owner-operators as a dispatch service. Almost all of its drivers come from the Polish-American community around its base of operations.

To date, says 22-year-old co-owner and former Coyote Logistics broker Tom Stawinski, they’ve relied on referrals from current drivers and owner-operators as well as advertising in Polish and Russian newspapers, but Stawinski’s treading into the waters of online ads and social media as the carrier looks to expand.

This year, he built a graphic map to illustrate primary lanes for the company’s loads outbound from Chicago for the early part of the produce season. He shared it via the LinkedIn social network in tandem with recruiting ads showing the company’s direct-deposit immediate post-trip pay options for drivers.

Fleenor Bros., Joplin, Mo.
Part-owner Kyle Cousins has seen growing pains firsthand in recent years. The Fleenor Bros. hazmat-hauling fleet’s performed well in its niche and has grown by a third in the last year alone, hiring more than a dozen new drivers for its 40 mostly team-driven trucks.

“The driver pool is not very deep anymore,” he says. “Primarily what we go after is teams. That makes the pool a bit smaller. Teams with hazmat that can get into Canada – it gets smaller still.”

When Fleenor was half the size it is today, “we heavily relied on referrals,” Cousins says. “After a while, those kind of dried up.”

They’ve tried a variety of things with some success:
• Putting company contact information on the back of dry van/tank trailers. “We have fairly nice-looking trucks, even our trucks that aren’t going to the shows. Now, if the number is attached to that truck, it gives that guy a first-hand look at what he’d be driving,” and an impetus to inquire.
• Avoiding one restrictive qualification. Cousins says “we relaxed our requirements” relative to Canada in order to deepen the pool of possibilities among drivers.
• Ramping up social media efforts via a company Facebook page. “In the last year to 18 months, we’ve really hit social media. That generates a lot of traffic. I don’t know that it necessarily generates particularly good traffic,” but numerous conversations have been initiated there, Cousins says. Drivers messaging the company via the page are encouraged to call direct for one of the few conversations that typically precede any prospect’s visit to the Joplin headquarters. 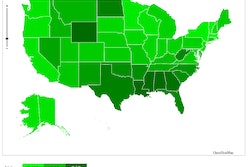