Ever plan a party for somewhere around a thousand people? Throw in the added snafu of about half the guests arriving in big trucks, and half of those guests with trailers that need a place to park, and you have the scenario I had nightmares about for almost six months.

But hey, what’s a little angst when you have an end result like we did this past weekend? (Good thing this is a rhetorical question, because my blood pressure was about to jump up and slap me silly.)

The 2nd Annual Take Pride Truck Show is in the books. We ended the weekend with a whopping total of $6,300 and some change, raised for Truckersfinalmile.org. To date, this is the largest dollar amount raised at a truck show for this charity, and we are thrilled to have been a part of it.

Once again, the generosity displayed within the trucking community has humbled me. I can’t begin to express how thankful I feel for the people we went to for sponsorship, who didn’t hesitate to write a check , or donate items for raffles and prizes . This year’s show was small enough, and we had enough donations, for a large number of the guests to get something nice – either free or at a raffle ticket price.

The music was incredible. Paul Marhoefer, Terrance Mathis, and Bill Weaver warmed up the stage on Friday with a few sets. Saturday afternoon the entertainment began with a great local band. (Ghosttown is the only cover band I’ve ever heard do Zeppelin and do it well.) Another local act, TRUK, did a fantastic job. I would highly recommend seeing them if you have an opportunity. (Like next year, at the show.) The evening and the show wrapped up with an incredible set from Tony Justice.

Justice and the band gave a blistering performance of “Sweet Home Alabama,” along with all of the other Tony Justice favorites. A very emotional flag-folding ceremony, in honor of all veterans, was performed by some of the vets attending the show before his finale song, “Stars, Stripes and White Lines,” ending both the performance and the weekend festivities with a sense of inspiration and pride.

Our mission statement for this show was for people to go away from it “inspired, not angry,” and our friends at OOIDA helped a great deal by having Monte Wiederhold come out Saturday morning for a coffee and doughnuts discussion about rules and regs within the industry. Monte spent about two and a half hours in discussion — it was a very hands-on, one-to-one meeting, and we appreciate Mr. Wiederhold for helping us promote the mission statement.

Yesterday, after we found out how much was raised, we were cleaning up and saying our goodbyes, congratulating each other, when Robert of TruckersFinalMile.org described the event as a “family picnic.” That’s about the best definition of what went on out there I can think of. It definitely didn’t go off without a hitch — there were more than a few fires to put out, and we learned some things about the voting process and etiquette for truck shows we didn’t know. We appreciate everyone for bearing with us. It will be better next time, and I can assure you the things that bothered you bothered us 10,000 times more.

Whether or not folks thought it was good or bad, three things happened that have never happened before at a truck show. (1) Mama (Sharon) Justice and Terrance (Jake Brake) Mathis got onstage and sang a hymn together, (2) Paul Marhoefer, Bill Weaver and Tony Justice sang “Six Days on the Road,” on stage together, (3) The show raised over $6,300.00 for Truckersfinalmile.org.

All in all, it was a success. A very heartfelt thank you to everyone who participated. Your donations made it possible for several families to have their deceased loved ones returned to them, when they are unable to afford it. That’s so awesome for such a small show.

One last note, Paul Marhoefer has to be given credit for the title “Littlest Truck Show that Could.” And it did! For a full list of winners and pictures, videos and live streams from the show, visit the Take Pride Truck Show website and Facebook page.

Here’s a couple shots to whet your appetite for now: 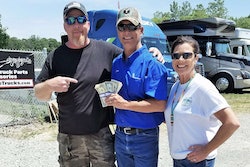 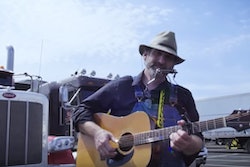 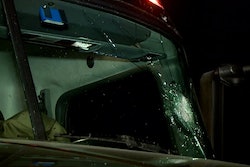 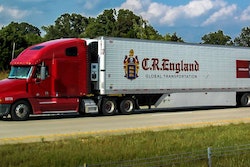