KeepTruckin, provider of one of the most popular electronic logging devices, said this week that it is using its customers’ ELD data and a brokerage acquisition to expand into freight-matching and related services.

In an April 8 blog post, founder and CEO Shoaib Makani said the company plans to launch this year a “freight exchange” that relies in part on using its ELD systems to partially automate load matching. The company intends to bring truckers’ hours of service data to bear in what it calls its Smart Load Board, should enough brokers and truckers participate in the platform.

Customer data also will enable a new service, Facilities Insights, that’s designed to give carriers granular information on pickup and delivery points throughout the nation.

Makani says KeepTruckin also has expanded One Point Logistics, a six-employee brokerage based in Charleston, S.C., when it bought the broker in September. Further growth is planned, partially enabled by using ELD data gleaned from KeepTruckin customers.

As of late 2018, the KeepTruckin smartphone-based ELD was used by 30 percent of one-truck owner-operators who use ELDs, according to a survey of Overdrive subscribers. It’s also used by fleets. KeepTruckin counts more than 200,000 trucks in its network of ELD users.

KeepTruckin feels “privacy is paramount” with that huge cache of customer ELD data, Makani says. All of the data used by KeepTruckin is in aggregate and therefore “de-identified,” he said.

Harnessing ELD or other data for freight-related purposes isn’t a new development. At the Mid-America Trucking Show last month, the provider of the Trucker Tools smartphone-app and “Smart Capacity” load-matching service, spoke of efforts to leverage location data from its apps’ users to track facilities’ average delay times. Trucker Tools also has integrated an ELD provider’s devices with its tracking and freight-match services.

The BigRoad ELD provider also operates a load-board-like service called BigRoad Freight, as does Konexial with its GoLoad service in partnership with a shipper TMS provider.

Load board stalwart Truckstop.com, further, inked a partnership with the Dock411 facilities info and review service, with intentions to integrate it into the company’s flagship load board. Many other load-tracking tech providers have integrated with a variety of ELD systems, which Overdrive covered in part in its December issue.

Contrary to other media reports, Overdrive confirmed with Makani that KeepTruckin is not partnering with the two biggest load-matchers, DAT and Truckstop.com, on the Smart Load Board.

Makani’s blog post also said that preceding the freight-matching platform’s launch, Facility Insights will be released for carriers who use KeepTruckin’s ELD. It will include average dock dwell times and other information. Makani expects to introduce later the ability for users to review facilities.

The image above accompanied Makani’s announcement of the effort at this link.

Facilities whose information will be included in the Facility Insights tool will have received visits from at least five carriers in KeepTruckin’s ELD user network, Makani wrote, part of the effort to ensure the aggregated data protects customer privacy. Facility Insights will be free to KeepTruckin ELD customers who continue to allow their data to be used toward the development of the tool.

With KeepTruckin’s terms of service for ELD users, customers agree by default to share data for use in developing and pricing new products and services, with some exceptions. Any customer not wishing to share data toward development of the Facility Insights and other tools can opt out by emailing those intentions to support@keeptruckin.com, Makani wrote. Those opting out will not have access to Facility Insights when it debuts.

The growth of One Point Logistics relies on a variety of resources, including the facilities database KeepTruckin has built with carrier data, Makani says. His blog post described the project as using Facility Insights “to screen for the best shippers and help them improve their own performance, so that our carriers get access to the best loads.”

Use of carrier ELD data by its own brokerage, which it’s focused on quickly growing in the six months it’s now owned OPL, in a sense puts KeepTruckin in a position of competition with its carrier users, or at least those carriers’ current brokers. Makani says, however, that its Smart Load Board development would not have been possible without their ownership of OPL giving them a hands-on understanding of how brokers interact with shippers and carriers.

“There will be a wall,” he says, between OPL and the central KeepTruckin team that doesn’t exist today, given that the new board’s development is incomplete. “OPL will have the same access to carrier data” – when they book a load to be tracked or a trucker shares their availability – “that other brokers do.”

“We want to empower carriers with this data,” Makani said, speaking at the Mid-America Trucking Show. He cited uses outside of load-matching: trip planning, avoiding congestion, battling detention time, driver-coaching for safety and other predictive analytics.

He also says that in their efforts to engage shippers, OPL takes data KeepTruckin has on shipper facilities, notably approximations of average load and unload times based on ELD users’ data, and presents it to shippers to encourage improvements.

As to whether brokers will be willing to participate in a load-matching service whose developer owns a competitor of theirs, Makani acknowledges it’s an open question. For smaller brokerages, he views Smart Load Board and KeepTruckin’s other planned offerings as providing a chance for them to better compete with larger digital brokers.

“These brokers are in trouble if they can’t get access to connected capacity,” he says, “if they can’t deliver an experience that’s as high-quality as the Uber Freights and Convoys” and the many other partially automated brokers out there, with automated tracking and, in some cases, a window on their carriers’ hours of service.  –James Jaillet contributed to this report 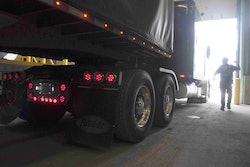