Sorting though the rich experience that was Rush Truck Centers’ Tech Skills Rodeo, held last week in San Antonio, is I’ve found a task best approached over weeks rather than days. If you missed the results, read on, or see my story from last week here. It’s impossible to get it all into the space of a single post or news piece, including as it did the drama of mutliple competitions, diverse educational opportunities for both working techs as well as students from San Antonio’s St. Philip’s College, and so much more.

A good bit of fun, too, as you can hear in the background of the first vid posted here, from the Monday night party at dueling-piano bar Howl at the Moon, on San Antonio’s Riverwalk. As 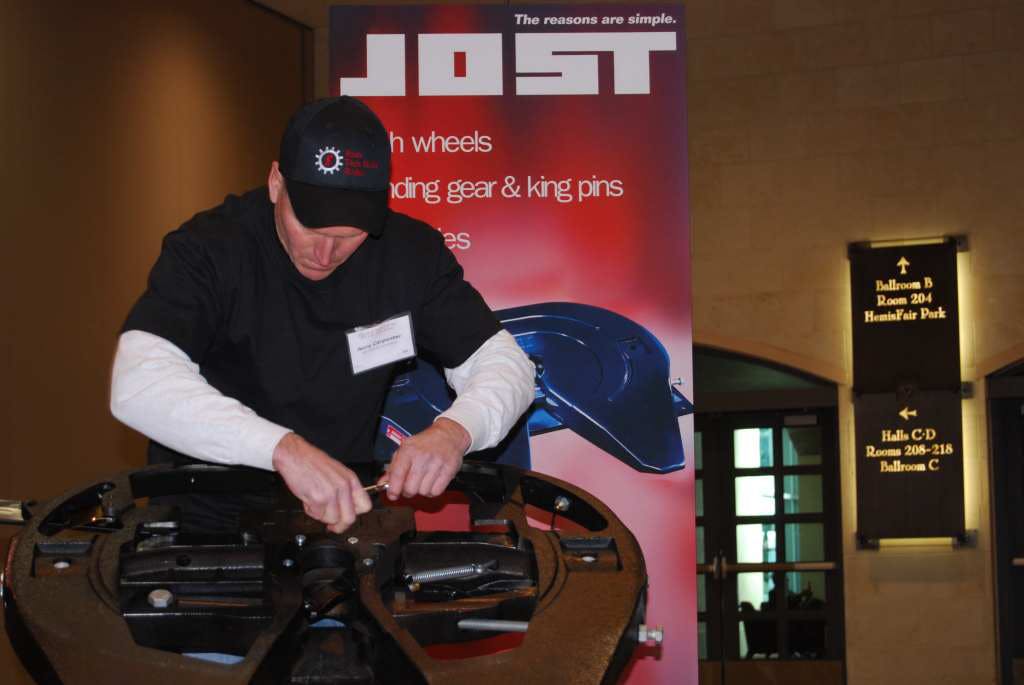 festivities that evening got under way — including in the end announcement of the 15 competing technicians who advanced to the final round in the troubleshooting competition — Jost fifth wheels reps began putting techs through the paces of a “Fastest Hands” fifth wheel dissembly/rebuild competition. The ultimate winner, Jerry Carpenter (pictured) of Rush’ Charlotte, N.C., International Trucks store, achieved a mind-boggling time of just under a minute forty seconds, taking home $500 for his efforts.

Getting the competition started at Howl at the Moon — and who should be honored for his gamesmanship — was Gary Fassett, of the Twin Falls, Idaho, location, featured here: 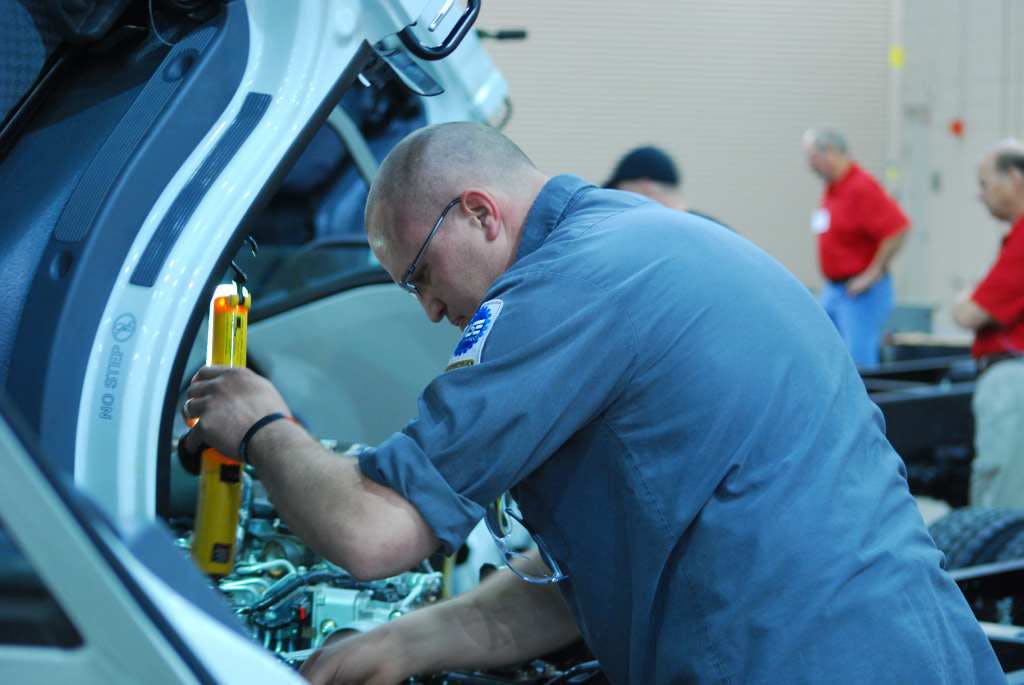 Though Rush Truck Centers’ service reach extends through 70 facilities in 14 states across the west and south, as far as the overall competition went, two techs from the state of Rush’s founding, Texas, took home grand champion trophies in Heavy and Medium Duty categories. Matthew Pogue (pictured here in action on the first day of competition), working out of San Antonio, walked away from final round mid-duty competition with $18,000 worth in cash and prizes, already planning, he told me, to put some of that cash toward custom upgrades to his 1992 and 1993 Cummins-powered Dodge dually pickups. 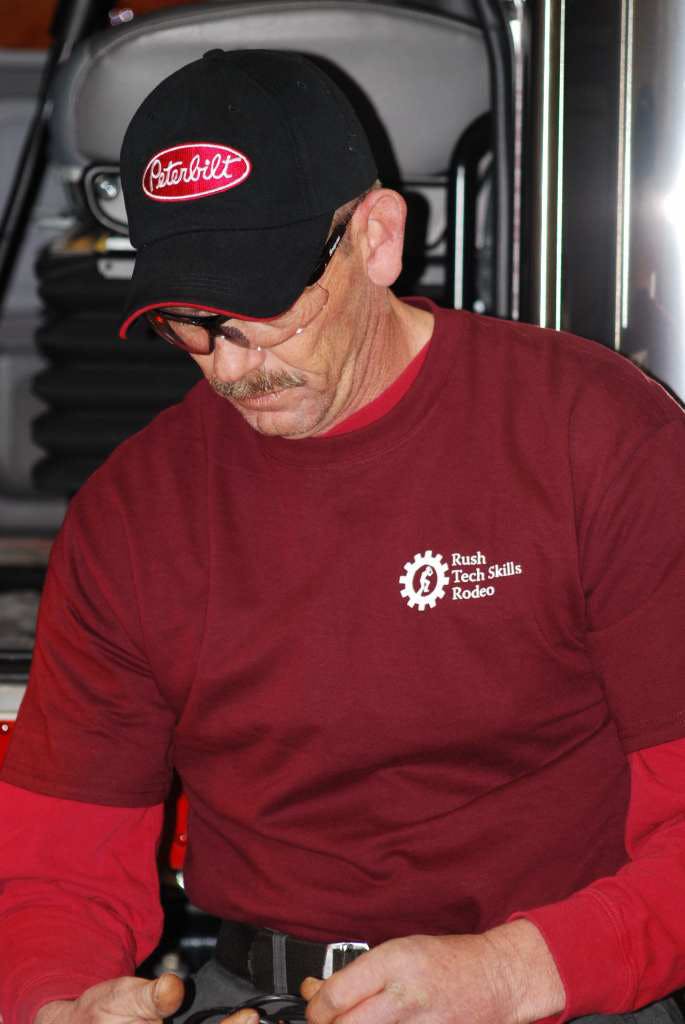 In heavy duty, a man Rush Service Operations Vice President Mike Besson continually introduced throughout the two-day event with the phrase “always the bridesmaid, never the bride” finally came out on top. Chris Zweifel, working out of the El Paso, Texas, location, qualified in the Caterpillar section of the competition in the first round, advancing to the finals. Nothing new for Zweifel, since he’s been in the finals several years running, including a 2nd-place finish overall in 2008.

“To win,” he said, “it’s just awesome.” He’s been with Rush for 10 years, following time working in maintenance in the U.S. Army.

“I can’t tell you how proud we are of him,” said Rush Regional Manager Mario Trevino, over Zweifel’s region. Technicians, said Trevino, echoing Rush President and CEO W.M. Rusty Rush, “are the unsung heroes at our dealerships. The Rodeo is just a great opportunity to really showcase and honor them and their abilities.”

Following find a short video with scenes from the competition, including an interview with Rodeo originator Mike Besson and an example of the kind of problems the techs are presented in the troubleshooting competition.

Likewise, I’ve updated the photo gallery from my previous post last week and included it here, below the vid. Full results of the competition follow. Enjoy.

Rush Tech Skills Rodeo Results
(All technicians advancing to the final round, in addition to cash prizes, were awarded permanent raises of $1 an hour, $1.25 and $1.50 for Reserve and Grand Champions.) 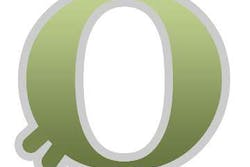 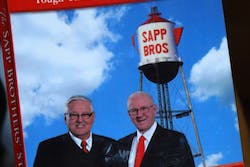 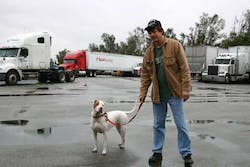 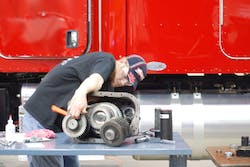