Seems forces are aligning to potentially put those outdated State of Michigan forms I wrote about almost two years ago back in action. You may remember the brief story — TCRG Consulting’s Richard Wilson pointed the old forms out to me shortly after FMCSA’s introduction of their hours-of-service revisions, which we’re now living under. They intro’d a little wishful thinking in my mind about the ability to legally split sleeper-berth periods to extended the duty day, which ability many longtime drivers look back on fondly — it’s been ten years gone at this point.

We can get further into some more-flexible sleeper-split wishful thinking, however, with the recent urging FMCSA got from none other than the American Trucking Associations on the issue of split sleep. In the news yesterday, ATA calls for a real-world pilot program to test the effects of split sleep following a laboratory study that showed little to no effects. The National Association of Small Trucking Companies, according to FMCSA, however, had long beat the ATA to the punch on requesting such an examination. It’s already in the works, the agency said.

Many readers were cynical about it all. As wrote Michael Hildebrand on Overdrive‘s Facebook page, “What? A possibility of allowing the driver to use his/her time in a way that may benefit them? I don’t think a government agency will ever allow ordinary people to make commonsense decisions for themselves. We all know inexperienced big government people know best!”

“Sounds to me like some college boys are going to make a lot of money at our expense,” wrote Norman Ott in his comments under yesterday’s story. He’d be right, but there’s at least potential for such a study to work out in drivers’ favor, no matter how much so-called “safety advocacy groups” may well fight any introduction of greater flexibility into sleeper splitting.

Josh Cronch, also writing on the Facebook page, echoed Ott but took it further, calling out agency backpedaling in light of new research: “Seems to me that they are starting to backstep on all these new hours of service rules they have been putting in place for the last five [and more] years. But now they need to spend money on studies to find out that there was nothing wrong with the rules to begin with. The problem was dispatchers pushing drivers too hard and drivers not having the guts to tell dispatch they were tired or having the brains to stop and sleep.”

(Seems to me a good argument for rep Richard Hanna’s hours-rollback bill here, too, eh? The issue there is that a Congressionally-mandated study on real-world effects of the most-recent hours revisions has not been finished, yet the rules are already in effect. By the way, Hanna’s not dropped the issue. Find a news story centered around his visit to a New York trucking company from this week here. A-and would more flexible sleeper splits alleviate some of the parking issues that so plague the highways?)

As it is now, with the rigid 14-hour rule and only a 2 and 8 possible sleeper-berth split, “you have to work your butt off to get anything done,” wrote Paul Bull. “It makes drivers more tired and short-tempered than the old rules.”

Team drivers on high-security, no-stop loads are out there running a constant 2, 8, 8, 2 schedule on hours, and many I’ve talked to would most definitely prefer more options for splitting, I know, too.

Wishful Thinking is the name some high-school bandmates of mine (way way back in the way-back machine) gave our little record label when we put out a 7-inch single, then a long-player, of some of our music. Sometimes, a little of it, wishful thinking, yields a little success. Long-term, though, you can see where my “musical career,” if you could even call it that, went.

Is there hope for a good outcome here? Tell me in the comments or utilize 530-40-VOICE to leave a message for a future podcast on the split-sleep subject. That’s 530-408-6423. State your name and location and speak your piece.

Following find a round-up of other responses to the news of a split-sleep study in process.

Shawn Knox: If you are a team driver there is no good reason that you cannot split up your driving time. The biggest problems with the new rules is the lack of flexibility. A long-haul driver who drives by himself should have different rules than team drivers. Short-haul drivers in LTL, grain haulers, farmers, and anyone who drives under 150 air miles [from home base] need their own separate rules as well. Most of us can live with the 34-hour restart, but good God get rid of that 1 a.m.-5 a.m. back-to-back rule. That is the dumbest thing of all.

Bryan Manley: They have messed up the hours of service so badly that nobody drives at night anymore. Truck stops are closing their restaurants at night. They are really screwing up this business.

B.J. Mckernon: Why don’t you just leave it to me to know when I need sleep? I’m not trying to go up and down these highways falling asleep.

Billy Fannin: My proposal: base number of hours one can drive on years of experience.

Lawrence Lamson: I love a nap during mid-day, especially after a hard fight with traffic or a good meal. Sometimes you don’t quite get a good night’s rest, and during the day it hits you. [Instead of] doubling up on java to fight it, all you need is a small power nap to boost you. 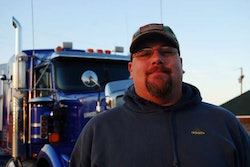