With enough yes votes Aug. 5 in the primary election in the Show Me State, the result might well be to the positive for those of you who don’t want to see a future where toll roads continue to proliferate as fuel taxes likewise continue to go up. There is a bit of downer in it for Missouri residents — the ballot measure up for vote would also, with enough yes votes, essentially raise the state sales tax by three-quarters of 1 percent and devote those new collected funds exclusively to fund transportation infrastructure.

State fuels taxes would be pegged to current rates, and toll projects would be expressly prohibited.

If you’re voting in Missouri, find language of the upcoming ballot initiative via this link.

Some say that it’s innovative approaches at the state level that are the best response — other than voting the deadbeats out — to Congressional deadlock in Washington on this and other issues. Athough: We can thank that deadlock, this time around, for the likely reprieve we’ll get from near-term serious consideration of what the executive branch appears to want on highways — that carte blanche removal of the prohibition on the tolling of existing interstates you likely recall. But don’t rest easy, notes Julian Walker, speaking for the Alliance for Toll-Free Interstates. “We know that tides can quickly change in Washington.” The Alliance “remains on guard against any future threats that would limit Americans’ toll-free access to the open road…. Pro-toll forces remain dedicated to an idea that would financially harm families and businesses for their own benefit.”

Walker added on the Missouri ballot measure that “there are many funding options worthy of consideration to raise road revenue. Different options may suit different states. The Missouri model is one approach that may be best there. Elected leaders and citizens elsewhere may have other ideas.”

Other states are trying different approaches, some, such as Virginia, likewise including language in transportation-funding legislation that makes tolling those existing interstates ever more difficult than it already is. All in all, over the past two years, as a look through the National Conference of State Legislatures’ transportation funding legislation database shows, 16 states have had varying success pushing through legislation related to transport funding and sales and use taxes. Half of those states got something through. Virginia notably is one of the states that also created new local retail-sales taxes similar to what Missouri has put on the ballot. You may recall the dust-up, too, that happened in Michigan during its efforts on the fuel tax there.

“The merits of any option should be evaluated by the public,” says Walker. “What’s clear about tolling existing interstates is that the public is against it because it is a horrible option for everyone except toll road builders. Missouri lawmakers clearly recognize that — the road funding legislation there contains a multi-year prohibition on tolling state roads.”

What’s happening in your state on highway funding?

View from the road
This one came in to Overdrive‘s Facebook page via reader Bruce MacWhorter, with just a brief bit of a description: “No polish required…” 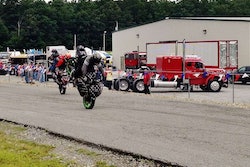 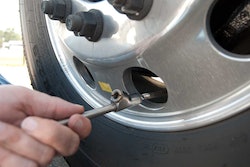 Special edition from ‘the preacher’ on retreads