When you were in school, wasn’t it a bad thing to be accused of disruptive behavior? In today’s parlance, business writers and consultant types have put a positive spin on the term for this or that disruptive technology set to revolutionize this or that business practice. It’s gotten such a positive spin in the age of Google and Amazon and Uber and Lyft and the like that companies actually boast in their press releases about being disruptive, in part because of the rewards that have heaped on some of the disrupto-pioneers. Can you imagine the classroom corollary?

What happened at school today, Timmy?

Oh mom, it was so great! While everybody was moping around about diagramming sentences I stood up in class and hollered about how annoyed I was with the teacher’s way of teaching and she totally just  gave me an A for the year! And she’s  going to use my methodology going forward!

And what did you propose, Timmy?

While it’s not an exact analogy, to be sure, many such proudly disruptive companies I imagine fail to see the irony of the negative capability inherit in the variety of points of view many owner-operators might hold about their products — ELD makers, the latest “uber for trucking” app with little in the way of actual freight to deliver, self-driving truck techs, etc.

But today the term came to mind after a conversation with owner-operator James Woods I had last week. More on the Texas-based independent later, but one of his own ideas for disruptions that might actually live up to the positive connotation so many want the word to have I think warrants a further look: Transparency in freight transactions.

We’ve debated transparency here before — some owner-operators, I know, want no part of it. But does anybody remember the TRUCC Act? Amid the fuel shock and precipitous fall-off in business of 2008 and surrounding years, Senators Olympia Snowe (R-Maine) and Sherrod Brown (D-Ohio) and Rep Peter DeFazio (D-Ore.) sponsored bipartisan legislation to codify into law the full pass-through of fuel surcharge monies charged to shippers to the entity responsible for buying the fuel. The bill was sold on those grounds, and supported by the folks at OOIDA. The fuel-surcharge aspect of it, however, wasn’t all there was to it.

According to the bill’s text, archived at GovTrack.us, not only would it have required carriers, forwarders and brokers to pass through all fuel-surcharge revenues but to disclose in any transaction “a written list that specifically identifies any freight charge, brokerage fee or commission, fuel surcharge or adjustment, and any other charges invoiced or otherwise presented to the person described in paragraph (1).” That person “described in paragraph (1)” would be the cost bearer of the fuel, or the owner-operator in the most relevant cases to this discussion. While this doesn’t go all the way to full transparency — say, requiring a line-item on the freight bill disclosing the actual amount the shipper is paying for the transportation in a brokerage contract — it gets pretty close.

In reporting in Overdrive concurrent to the introduction of this piece of ultimately failed legislation, it’s perhaps no wonder Robert Voltmann, head of broker/middleman organization the Transportation Intermediaries Association, howled about the “new disclosure requirements” amounting to a “‘re-regulation’ of freight transportation, in which all carrier, broker and shipper margins would be public information.”

Another measure in the TRUCC Act would have more explicitly, too, prohibited the presentation of “false or misleading information on a document or in an oral representation about the actual rate, charge, or allowance to any party to the transaction or transportation.”

I’ve been reminded of the TRUCC Act numerous times over the years, particularly when owner-operators argue about the lack of true rate transparency and sometimes exorbitant commissions pocketed by third parties to a freight transaction in the often-opaque spot market.

The “re-regulation” Voltmann bemoaned in 2008, however, I imagine might go a long way toward combating situations like those owner-operator Woods recently detailed to me. There are ways toward getting a good idea of what shippers are paying their brokers, of course — one is by talking to them directly. As Woods put it:

The truckers have no voice, even with Donald Trump in office. We thought he was going to help us, but he has done nothing to help us. Brokers know that we will take a load to keep from sitting. I’m one if the few guys who will get out and talk to the shippers – we know the shippers are paying $3,000 for a load of tomatoes, for instance, and the broker comes to us and says, ‘Man, all I’ve got in it is $1,900.’ Ask one for a rate sheet or transparency now, and know what they’ll tell you? “You have a good day, sir.”

Woods says he “caught” one of the largest brokers in the nation on two loads in recent times — the broker’s margin was “39 percent on one and 42 percent on the other.” He’s not the only owner-operator from whom I’ve heard such a story over the years.

The TRUCC Act never made it into law, not then or later, in any transportation bill. OOIDA ended up working with TIA on the broker-bond proposal in subsequent years, which raised the $10,000 bond required of brokers to $75,000. As reported in this story, TIA reportedly worked for an increased bond in part to compromise in order to prevent “public disclosure of broker margins” becoming law.

Do you think the increased bond was worth apparently sacrificing that particular item? 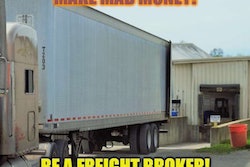 Podcast: ‘Make mad money! Be a freight broker!’: Independent James Woods on a culture of dishonesty among middlemen 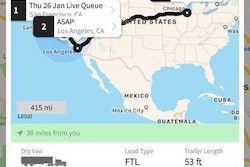