As noted in yesterday's installment in our 60th-anniversary series peering into Overdrive and trucking history, turning the CB on can yield positive safety impacts in all manner of dangerous scenarios on the road. Yet I'm glad to report today that the social and cultural ramifications of the simple practice are alive and well and, in a rugged winter season for over-the-road haulers all across the country, shining through with their own positivity.

Let's cue up Thomas Remington, flatbed owner-operator leased to Decker Truck Line out of Iowa and originator of the Instagram post showcasing the picture above. He had a load appointment get pushed late last week and then Saturday cancel on him. No mind – he needed to get some work done on his flatbed, and so he parked up at Love's in Wamsutter, Wyoming.

One thing you should know about owner-operator Remington – the man is a veritable "chef who also happens to drive a truck," in his words, that is. His @beardedflatbedguy profile on Instagram is a treasure trove of some of his on-highway culinary creations. When I-80 in the area shut down with a storm blowing through the next day, he got on the CB with his intentions to whip up "some barbacoa and tri-tip. Somebody said, I've got this or that. Somebody else said, 'I've got a grill.' I said, let's get organized and figure this out."

What Remington ended up with was a good ol' "regular truck driving melting pot" of 10 people Sunday night, more for brunch Monday and Monday dinner. "We had old-timers, folks who were really green, owner-operators, company drivers," he said. "It just made the terrible situation so much easier to deal with."

That first night the group ended up with what he informally calls a Mexican-flavors-inflected "trucker's stew," with that beef cheek and tri-tip – most of it came from the store of approximately two weeks' worth of food that Remington typically carries on his Volvo VNL740 midroof double bunk. He carries an Instapot air fryer, a regular Instapot, electric and gas stoves, a microwave – "when I don't need my chains" he brings along his gas grill – and all manner of common kitchen equipment besides, he said.

In short, he's the guy you want around when you're marooned at a truck stop for well more than a day with nary a way out. And, as he noted in this video from his Instagram profile, if you don't have the CB on in such a situation, like as not you'll never know he was ever in the vicinity.

Brunch the next morning was a "truckers' hash" of three different kinds of sausage, eggs, bacon, onions, chilis and cheese, Remington said. "I cooked it in batches and then put it all together."

On the menu Monday night? Jamaican jerk chicken and rice soup – onions, chipotle peppers and mushrooms involved, too, after he took some donations from drivers there and one of the stop's "shop techs let me borrow his personal vehicle to go into Laramie – an 84-mile round trip – to get more groceries."

Harrison, Arkansas-based Daniel and Phyllis Snow, meanwhile (whom regular readers will well remember), were coming off a frigid week spent marooned themselves at a Petro in San Antonio from Friday, Feb. 12, all the way through the following Friday the 19th. With the creature comforts of the big living quarters of their 160-plus-inch custom bunk, including shower and toilet, they were doing OK, generally speaking, until they ran out of water.

The Petro where they were parked was without power and water, too. "All of the water in that area was shut down," Daniel said. "Electricity was on a rolling blackout, so fuel was very limited. The restaurant [at the truck stop] was closed" given the lack of water. "A lot of folks around there were really in a bind because of that. They brought in Port a Potties – Petro tried to do all they could do, but they were limited because the whole area was paralyzed."

They did as they could. As their stores of water ran out, Phyllis posted to Facebook Thursday afternoon, sharing this picture:

What they didn't know was that a Facebook follower of theirs, Alex Zapata, lived nearby the area and saw that post as he was getting off work with H.E.B. grocers. He was a follower of the Snow's famous "Goose" Freightliner. While much has been made of the CB's utility in such situations, in this case, it's obvious a functional internet can play that camaraderie-building role as well.

Zapata, whom the Snows otherwise had never met, was suddenly knocking on the back door to their sleeper from the deckplate with his wife and kids out in their vehicle. He came bearing water – lots of it – and no doubt the stuff of memories that won't soon be forgotten.

"He said, 'Your wife posted on Facebook that you were without water. We brought you some water.'" The Zapatas had been without water themselves at home for "five days at his house – he had just got his water and electricity back on, and here he’s thinking about our benefit, and had two little kids in the backseat. By the time I slipped my boots on" to go outside, "he had a case of drinking water and a big two-gallon bottle of store-bought water sitting on the deck. Then he said, 'Hold on. I’ll get the big one.''"

How big? "He got one of these big, round clear jugs and he said, 'We use the bottle. Do you have something to put the water in?'

As noted in the caption to the above photo, Phyllis' gallon milk jugs had run pretty much dry – "we had eight empties and one with a little water in it. We got that big old clear jug he had and filled all of her jugs up," around 8-10 gallons of water all told, Daniel said. "We tried to pay the young man, but he said, 'No, this is what we’re supposed to be doing.' We were very humbled by that, to say the least."

The brother- and sisterhood of the road – it exists. And, sometimes, it'll find you, even when you're not looking for it. 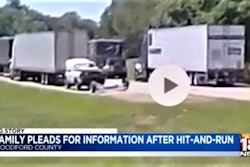 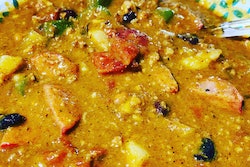 Recipes for the Road: Trucked-up Chili is good on its own, easily customized