Trucking all in the family: Generations of owners leave lasting legacies in Overdrive

It's long been a feature of the day to day of my work here with Overdrive, whose history extends back now six decades to a time well before my own birth, much less my own family's touch points with trucking – my father was a dispatcher for a short time with a mostly unionized carrier out of Spartanburg, South Carolina, as a young man, before a career whose bulk was spent in industrial water and wastewater treatment. Cousins among his extended family up in North Carolina were owner-operators when I was a kid and deregulation was having its ways with long-entrenched business models, enterprising owners with a willingness and ability to adapt among those who would come out of the 1980s and 1990s with the upper hand.

While all that was going on, trucks were being bought and sold, kids born, growing into adulthood enamored of the truck technology of their time and/or their parents' and grandparents' time, as the case may be. Owner-operator businesses were built following patterns handed down, and/or passed down from generation to generation themselves, and Overdrive was busy covering it all.

Later, from my very first days with Overdrive in 2006, a preoccupation with that history and the then 45 years' worth of magazines archived across a tiny hallway that ended in a single room at the office in Tuscaloosa there was set. It all started with that first instance – I can't remember today just who it was, maybe then-longtime hauler Monty Rhoades, or Tennessee-based Andy Soucy (both of whom I met early on via the old Truck.net online community message board), who said, "Hey, you guys had a picture of my truck in the magazine back in [insert year here]. I can't remember the month. Do you think you could help me find it?"

Even later, often enough such a request would involve a family reaching back into the legacy of a loved one who'd passed on – such was the case with the story of Eddie Karwaski, small fleet owner of the Apple House outfit running out of Pennsylvania for many years. I spoke with his daughter in winter 2019 on the anniversary of his passing in 2018, as she attempted to amass a collection of memorabilia of his decades in business hauling produce, including two spotlights in 1979 and 1981 issues of Overdrive. This rig of Karwaski's, a then virtually brand-new 1979 KW, was Tractor of the Month in March of 1979, and a picture we helped his family track down in 2019 at the time of this story.

As with so many small trucking businesses, both of Karwaski's sons were involved in various ways, from hauling to running parts of the back office and shop. And there are many other such stories that have been the bread and butter of Overdrive's highlighting of the culture of trucking through the years, built on family – either hereditary or the family of shared affinity for the business, increasingly apparent today as online networks work to chip away at the old boundaries of place.

For today's edition of our Monday 60th-anniversary dispatches, I've collected just a few examples. Follow links in the caption to each photo that follows to read through the multigenerational history embodied within each story. 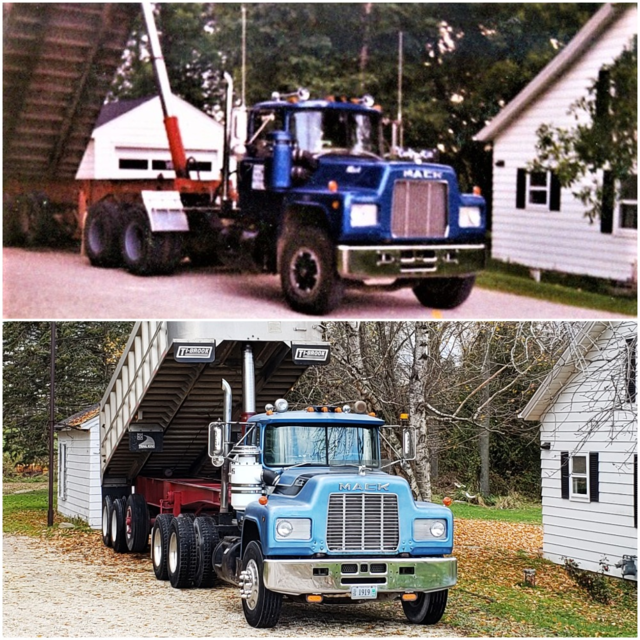 Trucking extended family across generations of owner-ops in Wisconsin ... | Owner-operator Seth Taylor in 2019 penned a tribute to his principal mentor in trucking, who he described as a figure influential in the manner of a second father to more than one young owner-operator in his area -- Carl Nyhof of Oostburg, Wisconsin, then 74 years young and the owner and operator of the R model Mack you see in these then and now pictures. The 1985 model is certainly well preserved for its 35 years in service under just one owner. Nyhof purchased the unit when it was new from a local Mack dealer called Karstaedt’s Services, Taylor said, and had run it ever since. Taylor called the elder Nyhof a “a great mentor to a few young owner-ops like me," part and parcel of how trucking as an independent is learned and refined in so many areas all around the nation. His history is "a really big deal among ‘short-haul’ guys like us that look up to Carl and his way of staying independent. Never much for flash or things that shine, Carl has never gotten much credit for all his years of dedicated work.” Read more of Taylor's appreciation of Nyhof via this link.

Have your own family story to tell? Drop a comment below or email me directly via tdills [at] randallreilly.com