All told the weekend featured seven races, with the main event, the Podium Race, taking place Sunday afternoon. That race determined the weekend’s points winner for the series’ season championship.

Morgan won both a heat on Saturday and the Podium Race on Sunday, earning him the weekend crown.

Sunday’s finale was “by far the most exciting of the day,” said ChampTruck director John Condren, as it had four different leaders and multiple lead changes.

“I don’t know if we exactly set the bar to beat,” Morgan said of his Powershift Performance team’s showing this weekend. “But the other guys are going to be going home and making a few changes. I guarantee by the time we make California,” the location of the next event at the Thunder Hill raceway in Willows, competition will “be a lot tougher” for everyone.

The Podium Race also featured ChampTruck’s first crash. Towards the end of the race, small fleet owner Allen Boles, who was racing his No. 3 black and green Peterbilt 359, slid through a difficult turn and into the path of the No. 11 Optima Batteries Freightliner, driven at that time by Brad Klemmensen.

Here’s video of the crash posted by Minimizer this weekend:

ChampTruck’s next race weekend is in late May in Willows, Calif., at the Thunderhill Raceway, which will be held in conjunction with an Overdrive’s Pride & Polish show.

Stay tuned for more coverage from this weekend’s races.

Here’s another video and a photo gallery from the weekend races: 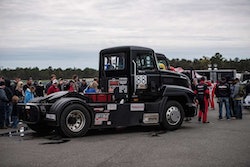 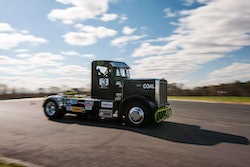 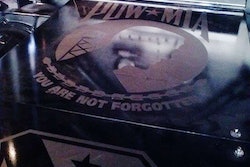