We were fortunate enough to be able to attend the 8th annual Guilty by Association Truck Show in Joplin, Missouri this weekend. It was our third year at the show, and it’s gotten better every year. The Martin family once again knocked it out of the park with a fantastic display of some of the most beautiful trucks in the country. Their hospitality never fails to amaze me. I’d lose my mind if I had to entertain and take care of 600 trucks and all the people, animals and mess that goes with them. Parking alone would make me curl into the fetal position in my blanket fort. We have so much respect and appreciation for this family, and look forward to their show every year.

The Special Olympics Convoy is always my favorite part of the show. With 403 trucks, this year’s display was phenomenal. There was also a phenomenally terrible display of why some people need to have their CB mic shoved into orifices of their bodies they may or may not sit upon.

Soapbox alert, because I’m about to get up on it.

Staging and rolling 400 trucks takes a lot of time and patience. It also makes the flow of traffic a complete and total clustersuck for the drivers who are simply trying to hit the Pilot or Petro for fuel and get back on the road. I get that not everyone is lucky enough to be in the general vicinity for the show, and I know I’d be really ticked off to not only have to watch everyone having fun, but be put behind schedule because of their fun. I get it.

I’d probably rant and scream a little to the voices in my head, and be all self-righteous about being “the only working trucks around.” I may even get on the CB and ask what the Sam Hill was going on in a way that was unkind to humanity in general, but I promise you this: if I got a comeback that said, “Watch your language, there are Special Olympics athletes and children in these convoy trucks,” I would shut it after I apologized for being a selfish potty mouth.

Unfortunately, that was not the case when we staged this particular convoy. And if the ol’ boy who was running his mouth had actually been something other than a petulant four-year-old CB Rambo, I doubt he’d be able to do much more that burp Connex parts for the rest of his life. It would have been different if there was no warning about the show, but there are highway signs telling people about the show in two different places, so not only was this foul creature a jerk, he doesn’t read highway warning signs. I’m shocked. I also sincerely hope he suffers a virulent, painful and necrotic strain of the herptafulffalpagus virus in his groin area.

That was the bad CB experience. Here’s the good one.

The weekend was capped off with an opportunity for us to participate in the filming of what will eventually be a video for Tony Justice’s military tribute song, “Stars, Stripes and White Lines.” I can’t even describe how cool this was, and how excited I am to see the finished product. Chris Fiffe of Big Rig Videos put together his own little convoy of fourteen trucks, driven by military veterans or offering a patriotic theme. We had the incredible fortune of rolling for about 100 miles with some of the most stunning military tribute trucks on the road. It was truly a once-in-a-lifetime experience we were both humbled and grateful to have.

Chris had some very specific shots he was looking for, and the highway we were using wasn’t shut down for filming, so CBs and good communication were important. These fourteen men, along with the careful direction of Fiffe, pulled off a hundred-mile video shoot in the regular flow of traffic like it was butter. I’ve never been so proud to be a part of something. The CBs were used as tools, information was correct and precise, everyone was courteous to one another, and it exemplified the proper use of a CB.

Don’t get me wrong — there was some joking and carrying on, but the end result was a perfect highway synchronicity, and it was a beautiful thing. Fourteen men who had never run together before made the whole process look like it had been rehearsed a hundred times, like a ballet of giant beasts. It was wonderful.

I’ve said it before and I’ll say it until I get my way or drop dead, because I’m annoying like that: every single professional driver on the road should own, know how to use, and employ a CB every minute that truck is rolling. It should be a course in the driving schools, along with a a basic code of conduct, because unfortunately, not everyone is raised with one.

Channel 19 is for work and the occasional good-natured ribbing. If you want to rant and rave and act like you never had a momma or daddy to whip your butt, go on to the other 39 channels and have yourself a ball, but when you come back on 19, you better behave yourself.

You got a copy on that? 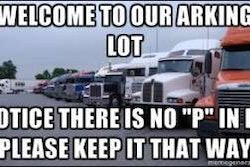 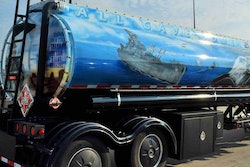 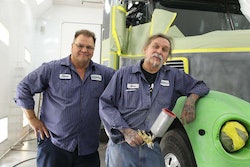