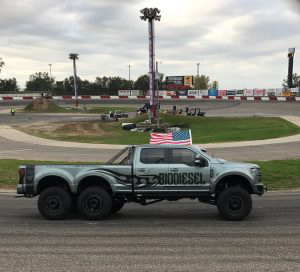 The Bandit Big Rig Series is set to take on its next challenge at Elko Speedway in Elko, Minnesota, this weekend.

The race, presented by the Minnesota Soybean Research and Promotion Council, will be held Saturday, July 27. Racing action will begin at 7 p.m. with heat and challenge races, followed by the feature race.

There will also be pre-race activities, beginning with the Fan Series Truck Show beginning at 11 a.m. Track gates will open at 3 p.m., and a Bandit driver meet and greet will be held from 5-6:15 p.m.

Tickets are available online here for $20 with children 8 and under getting in free.

The race is the sixth of 11 on the Bandit Series 2019 schedule. Two-time defending series champion Ricky “Rude” Proffitt holds a slim lead in the overall points standings over Allen Boles, Mark Noble and Craig Kruckeberg.

The race will also be the final stop for the “Indomitus” truck built by the stars of the Discovery Channel’s Diesel Brothers. The Ford truck, which has been on a tour since last year with the Minnesota Soybean Council, is 11 feet long and is the first truck 6×6 super-duty pickup. The truck runs on biodiesel.

“It’s been a heck of a ride for Indomitus. The truck’s been all across Minnesota and was featured in two episodes of the ‘Diesel Brothers,’” says MSR&PC chair Cole Trebesch. “The events last year were extremely well-received, and we couldn’t think of a better stage for Indomitus to make its grand exit than this year’s Bandit Big Rig Series.”