Ray Rodriquez is no stranger to Pride & Polish or the Great American Trucking Show, picking up numerous Best of Show and first place awards through the years. This year was no different, as the latest creation from Lil’ Ray’s Transport, “Uno Mas,” earned him a first place in the 2000-and-older Bobtail category at GATS in August.

“Uno Mas” is a 1999 Peterbilt 379 that features a flame and dragon theme throughout. Ray’s wife, Susie, did most of the design work for this truck because the build happened when Ray was on the road during a busy season. Ray says the truck got its name – “one more” in English – because he didn’t think he would build another show truck, but when Susie decided she wanted to, the truck got its name.

As Ray and Susie describe in the video above, the rig features a dragon theme throughout. “I like dragons,” Susie says for the reasoning behind the theme. The blue flames on the front end give way to dragon heads in the flames on the rear fenders. The back of the cab has “Uno Mas” painted across the top with a dragon below. The truck’s floors are intricately painted with dragons as well.

The rig also sports 707 lights that can change between amber, red and blue. Under the hood is a Cat 3406 with 550-horsepower and a 13-speed.

Even though Susie did most of the designs for the truck, Ray still put some of his influence on it. He gave the truck the number 21, which is displayed under the breathers as “777,” a nod to Ray’s love of gambling.

Despite the truck’s unique design and paint scheme, it is still a working truck that Ray drives 10,000-plus miles a month hauling heavy equipment. 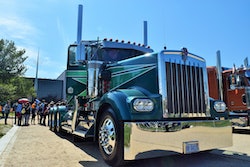 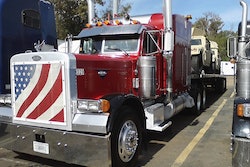 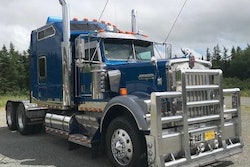 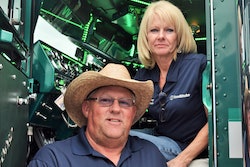