James and Shelly Russell haul high-security arms, ammunition and explosives (AA&E) for the government with this extended sleeper 2016 Western Star 5700XE. The couple, out of Mountain View, Missouri, is leased on with Bennett Heavy & Specialized.

The rig was the only extended custom sleeper on display at the Great American Trucking Show Pride & Polish in August, and even though it didn’t bring home any hardware, it was still a head-turner.

The 120-inch sleeper features all the amenities of an RV with a fold-down full-size bed that, when folded up, is a table with two bench seats, a sink, two-burner stove, TV, shower, toilet, refrigerator/freezer, microwave and more. The truck also came standard with a 34-inch rest cab that includes extra cabinets and drawers.

James says picking up from supply depots and delivering to military bases leaves the couple in “no man’s land” a lot of times without a nearby truck stop or rest area, so the amenities of the extended sleeper are almost a necessity for them on the road. The truck’s water tank carries 35 gallons, which is enough to get them through a couple days of showers, bathroom usage and dishwashing.

Due to the nature of the AA&E hauls, the Russell’s truck doesn’t feature much to stand out, but it does sport custom stainless steel rear full fenders and some extra lights to be more visible at night. Additionally, in the top rear corner of the sleeper on the passenger side is a sticker honoring Vietnam War veterans and, specifically, the 9th Infantry Division in which James served. 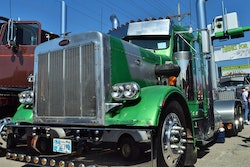 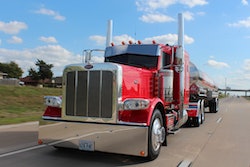 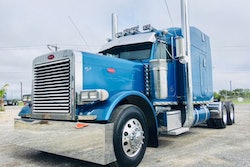