Of the 100 show trucks staged at the Mid-America Trucking Show in March, one of the real standouts was a rig brought by Dan and Tracy Kaderabek, whose Badass RV business builds custom recreational vehicles.

The exterior attention-grabber was the gold-colored stainless on the Kenworth W900 and the custom RV it pulled. The interior of the trailer, though, was an equally impressive showpiece of household amenities and efficient power-sharing.

The W9 is also used in Badass Trucking, the couple’s Wisconsin-based hauling business. Its stainless is “like what they use in elevators in Miami hotels,” says Dan Kaderabek, noting where he first got the idea for a feature rarely seen on custom trucks. “That’s why this is the coolest truck in the United States.” The stainless was imported from a supplier in China.

“We run everything on this rig with solar power,” Dan says of the 53-foot Pace American trailer normally used for NASCAR hauling. “Along with lithium ion batteries, a generator might run an hour in 24 hours.”

A Blue Ridge Air cartridge system for heating and cooling has a system in each room and a control unit in the front of the trailer. “It’s whisper quiet, so we can heat or cool the coach very quietly instead of the traditional on-the-roof AC units that are noisy,” says Tracy Kaderabek.

The upstairs bedroom has a king-sized bed and, in a closet, an inverter. “During the day, when the solar panels are powering the trailer, it hums along,” Tracy says. “When the sun goes down, the inverter switches to the battery bank in the front of the trailer.  When the batteries are depleted, this automatically switches on to a generator. It powers the batteries and charges them back up and shuts itself off. It can start in the middle night and turn itself off.”

The trailer’s slideouts are designed so that when both sides are pulled in, such as when parked at a crowded truck stop, “we can still function in the space,” Tracy says. The kitchen includes “a full-sized household refrigerator, a gas stove, a convection microwave and a double sink.” A bedroom closet has space where they plan to install a stacked washer-dryer combo. The bathroom has a full-sized shower. Oak and hickory are used in some rooms.

Bringing up the trailer’s rear is a “garage” with a 7,000-pound car lift. Frequently there’s a Jeep on the bottom, with the car-lift holding motorcycles or an ATV or a small boat above it. 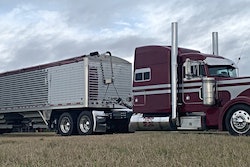 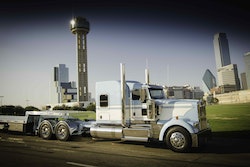 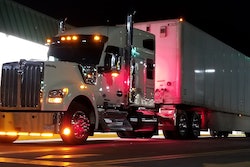