‘Lawless’ offers fun look at the dark side

Danny Autullo took one of the hottest trends in the show truck scene – rat rods – and added his own touch by dressing up an old Peterbilt 379 with custom metal artifacts.

“Everything on that truck I designed and hand-built myself,” he says. “Poles, front bumper — from scratch.”

Autullo customized “Lawless” through his DA Customs, in Molee, Illinois, near Chicago, with some help from the H&H custom sheet metal shop in Chicago. He’s certainly no stranger to metal fabrication, since he also owns DA Weld Shop, which does industrial work.

The truck is powered by a 12.7-liter Detroit Diesel Series 60. Autullo says it’s turned to about 935 horsepower, and with twin blowers can get up to about 1100 hp.

Complementing the distressed rat rod look, Autullo’s creative spin leans to the spooky side: notably skulls and spider webs. He says some academics, studying why some Americans are fond of skull images, have contacted him about his work, “trying to figure out why I’m so obsessed with skulls,” he says. “They represent death, but I’m not really into death at all. I like living.”

The particular skull imagery he uses is often called “The Punisher.” It originated in 1974 with the Marvel comics character Frank Castle, also known as The Punisher. The image has been adopted by some members of the U.S. military. 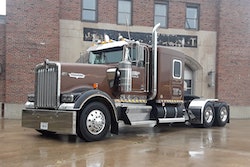 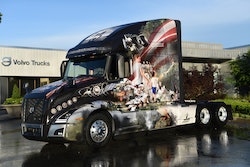 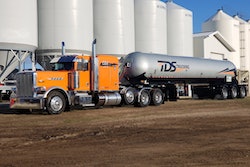 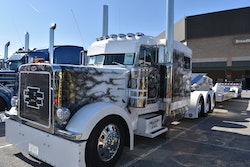