A three-judge panel for the U.S. 7th Circuit Court of Appeals has denied the Owner-Operator Independent Drivers Association’s request for the court to rehear its case against the U.S. DOT’s electronic logging device mandate, which takes effect later this year. OOIDA says it plans to appeal to the decision to uphold the mandate to the U.S. Supreme Court.

The owner-operator advocacy and lobbying group sought a rehearing en banc — a rehearing by all 12 judges on the 7th Circuit. Three of the twelve judges heard OOIDA’s case in September and issued a ruling in late October upholding the ELD mandate. OOIDA filed its motion for a rehearing December 14.

The denial by the 7th Circuit appellate court to rehear the case leaves OOIDA and the owner-operators involved in the lawsuit one remaining judicial option: A hearing by the Supreme Court. OOIDA says it will plans to ask the nation’s high court to hear its case. For the case to go to the Supreme Court, four of the nine Justices on the court (currently eight, given the vacancy left by Justice Antonin Scalia) must vote in favor of hearing the lawsuit.

OOIDA has not said when it plans to appeal its case to the Supreme Court.

OOIDA filed the lawsuit against the mandate in March on behalf of two owner-operators, Mark Elrod and Richard Pingel. The trio asked the court to strike down the Federal Motor Carrier Safety Administration’s December 2015-issued rule requiring nearly all truck drivers to use ELDs to track duty status instead of paper logs, with a few exceptions.

In the suit, OOIDA argued the rule violated truckers’ 4th Amendment rights to privacy and did not meet Congress’ stipulations for the rule.

The 7th Circuit judges that heard the case disagreed, however, dismissing all of OOIDA’s arguments against the rule and upholding the Dec. 18, 2017, compliance date of the rule.

The association also said it plans to work with Congress and the incoming Trump administration to reevaluate the rule. Congress called for the mandate in 2012, however, with broad Republican support. 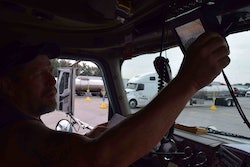