A bill with bi-partisan support has been introduced in the U.S. House that if passed would undo the current hours of service rule and allow truck drivers to revert back to abiding by the hours rules in place prior to the July 1 changes.

The True Understanding of the Economy and Safety Act (TRUE Safety Act) was introduced Thursday, Oct. 31, and would delay the current hours rule until Congress’ investigative arm, the Government Accountability Office, can assess the methodology the Federal Motor Carrier Safety Administration used to craft the 34-hour restart provisions in the new rules.

If the bill is passed, the GAO would be required to perform the study, and FMCSA would be barred from re-implementing the July 1 restart provisions until six months after the GAO submits its report to Congress.

Hanna said the bill would allow Congress and the GAO to assess the regulations “to ensure the rule makes sense and will not actually harm the traveling public and the American economy.”

“It is wrongheaded for the federal government to impose an arbitrary and capricious regulation that impacts almost every sector of the American economy without first finishing a study on its effectiveness,” Hanna said. “Federal agencies should have an obligation to prove that new rules and regulations do not cause more harm than good – in terms of both safety and costs.”

Rice said the bill will “rein in FMCSA,” which he says has “abused its authority.”

“[FMCSA] is requiring truckers to comply with one of the most stringent parts of its regulation prior to receiving their study’s findings,” he said, adding that the bill would “require an additional study to ensure that our truckers are not being over-regulated.”

In July, Hanna had tried to attach an amendment to a larger transportation bill that would have undone the current hours rule, but the bill was pulled from the House floor July 31 before Congress recessed in August.

In August, 51 members of the House, partly led by Hanna, sent a letter to Secretary of Transportation Anthony Foxx expressing “deep concern” over the hours rule and the fact that FMCSA had not yet reported the findings of an hours of service study — as required by the MAP-21 highway funding law — to Congress yet. MAP-21 required the study results be submitted by March 2013.

Hanna in a statement about the letter signaled he intend to involve Congress in the hours rule, saying he wanted to “restore some commonsense to this flawed regulatory process.”

Foxx responded to the letter offering support for the hours rule and the research behind it.

In August, a U.S. Court of Appeals in the District of Columbia upheld the hours rule, except for the mandatory break for short-haul drivers, which the court vacated.

More information on the bill, including response from trucking lobbying groups, will be posted when it becomes available. 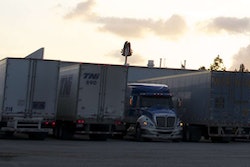