The program, run by the the Software & Information Industry Association, is the industry’s most prominent B2B journalism competition. A panel of over 80 judges reviewed the 235 finalists in three stages to select winners in 24 categories. Winners will be announced June 9.

Overdrive is competing in these categories:

Best Range Of Work By A Single Author

Overdrive Senior Editor Todd Dills, a five-time winner in this category since 2015, was nominated for his large output of writing, podcast, video and webcast work.

The Channel 19 blog, written by Dills, offers informal presentations of trucker profiles, industry issues and other features about trucking.

Overdrive’s reporting of last year’s hours of service revision was written by Dills and James Jaillet, then executive editor for trucking at Overdrive’s publisher Randall-Reilly. Among the stories entered was “New rule, new perspectives.”

“Over the Road” was a co-production of Overdrive and podcast group Radiotopia about the history, personalities and gritty realities of long-haul trucking. The entry recognizes trucker Paul Marhoefer, Dills, and Radiotopia’s Jullie Shapiro and Ian Coss. Marhoefer, who’s also a recording artist and an Overdrive contributing writer, hosted each episode. 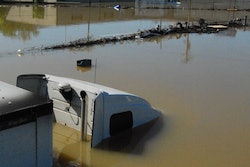 ‘Over the Road’ episode 3: A brief history of trucking in America