This piece, published July 23, 2009, has been updated for Overdrive's 2021 60th anniversary series and speaks to two aspects of trucking history. One is the role truckers played in developing the Trans-Alaska Pipeline coming out of the oil processing complex at Prudhoe Bay on Alaska's northern shore. The other is the more recent "Ice Road Truckers" TV series, which set some of its seasons on the snow-covered Dalton Highway between Fairbanks and Prudhoe Bay, which runs through Coldfoot.

A rare roadside attraction on the Dalton

Faithful watchers of “Ice Road Truckers” know that there ain’t much between Fairbanks and Prudhoe Bay. There’s a few state highway facilities for maintenance of the Haul Road, a few resort facilities (closed in winter) when you cross the Yukon River, and then Coldfoot Camp at roughly the halfway mark.

It’s considered the world’s northernmost truck stop. There’s food, fuel, lodging and other amenities. When I rode the Haul Road with George Spears, one of the stars on “Ice Road Truckers,” in 2006, we stopped there. We had a fine meal and chewed the fat with other drivers before traversing the remaining 239 miles of wilderness that ended at Prudhoe Bay.

Coldfoot began around 1898, earning its name when thousands of gold-hungry settlers arrived, then quickly got cold feet about the prospect of wintering there, according to the settlement’s website. Many made like birds and headed south.

“At its height, Coldfoot had one gambling hall, two roadhouses, seven saloons and 10 ‘working girls’ (many of the local creeks are named for these friendly women),” says the website. By 1912 the miners relocated to richer ground 13 miles away in Wiseman, and Coldfoot became a ghost town.

Coldfoot revived in the 1970s when a camp was established during construction of the Trans-Alaska Pipeline. “In 1981 Alaskan dog musher Dick Mackey set up an old school bus here and began selling hamburgers to the truck drivers,” says the website. Truckers, using crates that had held pipeline insulation, began hammering together what grew into what is now Coldfoot Camp.

[Related: A salute to the 'Old Filthy' 1957 Kenworth fuel hauler] 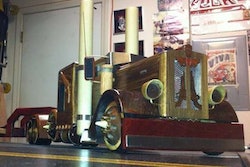 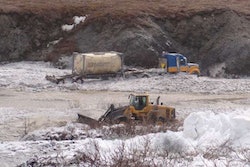