If you’ve noticed some of the truck driver income numbers in the news lately, you might be scratching your head. Especially if you’re a struggling owner-operator, wondering if you’d earn more and stress less by going back to the company driver ranks.

The California Trucking Association and another group with an interest in maintaining the independent contractor status of port owner-operators released a survey this month that says in California, owner-operators are able to earn $17,400 more than company drivers. That spread grows to $20,000, based on the U.S. Department of Labor’s nationwide company driver median wage of $39,520 for 2014, cited in the report.

Enter the Oct. 14 Wall Street Journal story, “Truckers Haul Home Big Increases in Pay.” It says company drivers this year are earning $57,000. That’s based on the respected survey of medium and large fleets done for two decades by the National Transportation Institute.

The reality: “aggressive changes” in pay over the last 18 months, he says. Many fleets have been reporting year-over-year increases as high as 12 cents per mile. “We’ve never seen a 12-cent change before,” Klemp says. “We’re used to seeing 2-cent changes.”

As for owner-operator earnings in 2013, the California groups’ $59,478 median exceeds the $52,406 average reported for 2013 by financial services provider ATBS, which processes thousands of owner-operator tax forms.

That’s quite different than the California report’s spread of $17,400. I doubt pay scales in California were that skewed relative to nationwide norms in 2013 – company drivers being so low and owner-operators so high – but it’s hard to say.

What many of these numbers indicate is that earnings of $50,000-$60,000 are now commonplace for many employed and leased long-haul truckers. ATBS clients are on track to earn an average $60,000 this year. Klemp’s take is that owner-operator earnings have enjoyed three strong years of increases, and company driver compensation is playing catch-up, narrowing the gap with owner-operators.

Most owner-operators probably don’t care if company driver earnings are on par with theirs. You love being more in control of your equipment and your career. You’re willing to bet your hard work and smarts will get you through the bad times and pay off handsomely in good times.

How has your pay trended in recent years? Sound off below. 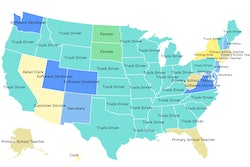 Where driving jobs have arisen since 1978 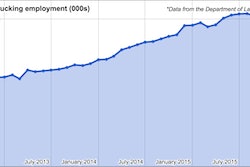