There are about 250 fewer parking spaces for large trucks on the Georgia I-75 corridor than there were 18 months ago.

A multiplicity of factors now have OTR truckers negotiating a span of 190 miles with little to no probability of designated nighttime parking. Those factors include the implementation of the ELD mandate, Georgia’s closure of four rest areas along the I-75 corridor for scheduled renovation, the shuttering of a large truckstop in Adairsville, recent crackdowns by area businesses, and a generally improved economy resulting in greater traffic. The last points of probable parking after that time — Unadilla, at mile marker 121 to the South, and Adairsville at mile marker 306 to the North, plus the additional mileage going around Atlanta on 285 — comprise a veritable 190-mile parking desert.

Many truckers with loads to points North and South simply settle in for the night outside the red zone, often leaving two-three hours of utilization on the table. Some just plow ahead anyway, blowing past the parking desert, letting their hours expire, and taking their lumps from safety the next morning. Those whose circumstances demand they  attempt finding parking within the span of those two points anytime after 7 at night, like so many 747s low on fuel with no clearance to land, wind up touching down in some of the worst possible situations.

Wisconsin-based independent owner-operator Rob Hallahan had to find parking in Union City, a suburb of Atlanta, in an abandoned lot next to his customer in order to make his hours of service work for the next day. That night he was attacked by a species of #parkingdesert viper called The Booter, who struck both his W900B and his stainless steel spread-axle van until he coughed up $500. The lot, according to Hallahan, was poorly lit with sparse signage prohibiting truck parking. He saw a pickup truck circling the lot late at night with its lights off, disappearing behind the abandoned business at the site.

A while later, the pickup reappeared, this time with a yellow siren light on top. The viper had slithered up to the side of the truck under cover of darkness and shackled the Badger State native’s pride and joy, the 20-time truck show winner “Big Orange.” A good ol’ boy came out of the pickup and informed the independent trucker he had been booted. Hallahan, outraged, called local law enforcement, who informed him they would not intervene, as it was a “civil matter.”

“How ’bout I just punch this guy in the nose?” he asked them.

The response: “Then we would have to come out there,  sir.” One wonders whether taking a sawsall to the boot would be a “civil matter” as well.

Hallahan is not alone in his outrage. The pox of private parking enforcement has been sparking anger  among the general citizenry of greater Atlanta for some time now, with even former mayor Kasim Reed’s GMC Denali taking its place as one of the privateers’ victims. On May 24, the Atlanta Journal Constitution reported that “Atlanta car booting practices may finally get the boot.” On June 1, at city hall, 55 Trinity Avenue SW, a public meeting will be held from 10 to 11:30 a.m. to discuss proposed legislation designed to reform the booting industry. One wonders whether trucks themselves will benefit from this reform. In a perfect world, where money was no object, wouldn’t it be nice to go to that meeting on June 1 and ask?

As we plow full-bore into the first peak freight season since the ELD mandate’s implementation, it becomes increasingly clear that the entire truck parking infrastructure of the state of Georgia has been built around the assumption of the driver’s ability to create a narrative on paper which enabled him or her to surmount real world obstacles such as those that Mr. Hallahan and so many others have faced. Stripped of the agency to create a plausible account of one’s activities, the ability to negotiate real-world situations, despite one’s best possible efforts and planning, is in the rear-view.

Incidents such as Mr. Hallahan’s also raise questions with regards to rates on loads going in and out of areas like this #parkingdesert. One thing that will always be the inheritance of the independent is the inexorable power to say, “No. I won’t go there. Not for that.”

Mr. Hallahan’s experience suggests the need for some sort of #parkingdesert surcharge just for putting up with the untenable situation he faced. $500 sound about right?

Please tell us your #parkingdesert story. This can’t be just limited to Georgia. 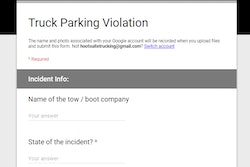 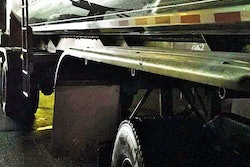 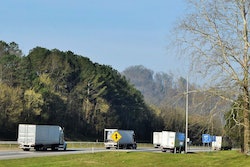