Matt ColeTodd Dills
The accuracy of variable message signs like the one pictured here are sometimes called into question by drivers, but they are still used by many truckers to help find available spaces.

Truck parking is consistently ranked among the top issues facing professional truck drivers on a day-to-day basis. In fact, it was ranked as the top issue by drivers in the American Transportation Research Institute’s most recent Top Industry Issues survey. Earlier this year, Overdrive readers likewise put parking capacity as their No. 1 ask for the incoming Biden DOT.

With parking capacity infrastructure investment long uncertain in Washington, to help alleviate a clear capacity strain in spots nationwide, a number of states have implemented various forms of technology – roadside signs ahead of rest areas, online modules – to alert truckers in real time of available parking. Such technology helps reduce the chance that drivers miss legal opportunities to park. Some states have also implemented systems that can alert drivers on in-cab telematics systems or mobile apps of available parking.

ATRI studied drivers' use of both types of systems, finding a third of respondents use both apps and signs to help find parking, while nearly 25% reported using only apps and 14% using only signs. Combined with our own survey of Overdrive readers, a few key findings emerge around the utility parking-info systems hold for truckers. Improvements in touchless delivery direct to the cabs of working haulers could be the holy grail for mobile-comms systems' efficacy. For roadside signs, it's all about accuracy and sign placement.

After ATRI's study was released, Overdrive surveyed its own mostly owner-operator readers about parking-info use.

Among readers answering some form of "Yes" to the question in the above chart, 61% reported using both apps and signs, while 32% said they only use apps or in-cab communications. Just 7% relied only on signs.

Those results bolster the strategies of states that have moved more quickly on delivering information via online networks, such as Iowa, said longtime truck parking advocate and former owner-operator Scott Grenerth, now with the Truck Specialized Parking Services company. After building infrastructure to accurately count available/not available spaces at dozens of sites, Iowa "elected to instrument far more sites and not the signs." The state put in place an online info-delivery system in tandem with that in an effort to reach more drivers, more quickly, he said. "The signs are not cheap. There’s a lot that goes into that, and a lot to maintain."

Various kinds of space-occupancy detection are used. They range from crowd-sourced information presented through some apps (the popular Trucker Path app is a notable example) to monitoring technologies that use highly accurate, automated cameras to count available truck parking spaces, ideal in ATRI's view. Cameras are not impacting the pavement, which is important during winter freeze/thaw cycles in many regions.

Though ATRI’s study found that 57% of drivers had utilized a truck parking app in the previous 12 months, limitations were foregrounded, too. The federal “one button press” restriction on mobile handheld devices presents a conundrum for information delivery when it's needed most of the road.

Perhaps reflecting those limitations, nearly a quarter of respondents to Overdrive's own survey reported not using any technology whatsoever to find places to park. And 10% use apps only to reserve spaces. Such services are offered through major truck stop networks and some other private networks, largely.

In the words of the ATRI study, “a driver must already be parked somewhere to utilize the truck parking availability app for parking needs down the road.”

Trucker Path topped the organization's list of apps used for parking availability intel. The MyPilot app from Pilot Flying J was second on the list, followed by TA-Petro’s TruckSmart app at 18%. Nearly 20% of drivers who took ATRI's survey reported using multiple apps to find available parking. The organization felt this use of multiple apps demonstrated a need for a more comprehensive solution. Embedded "information push" systems that automatically push parking availability information to drivers on an in-cab device could be, ATRI said, "the most efficient and effective solution," solving both the handheld-device regs conundrum and delivering "geographically relevant" data on availability.

Long-haul truckers, which ATRI defined as those whose average length of haul was more than 1,000 miles, are most likely to see those so-called "variable message" roadside signs (VMS). Yet such haulers find them less useful than regional drivers, according to ATRI's research. Those results underscore the longer-range planning of long-haulers before trips, yet length of haul on average has been on the decline for years, as Overdrive has reported.

"Many truckers do appreciate having the signs at roadside," said Grenerth, referencing his many conversations with working haulers.

Yet usefulness is also predicated on perceptions of accuracy. "Anecdotally," ATRI said, "the degree of usefulness of the [study's underlying] data likely relates to the degree of perceived accuracy of the technology," too.

It's not hard to find evidence of accuracy skepticism. "The signs are useless," said Johnny Wilson, commenting at Overdrive's Facebook page. "The number of available parking is never correct. Nine times out of 10, you pull into the rest areas and they are full when they claim they have parking."

In some cases, sign placement could be a factor in those inaccurate readings. Many state DOTs are sensitive to that issue, said Grenerth, not-nd thus default to placing signs never more than "just a mile before the rest area. That's really close because, in my honest opinion, there’s a little paranoia about" inaccuracy. "If a sign's five miles down the road … it’s not going to change that dramatically that quickly. 50 miles? Absolutely yes."

Some of the signs implemented to date, Grenerth nonetheless admitted, "are not in an ideal location." ATRI survey respondents reported seeing signs in 40 states.

[Related: The not-so-long haul: Operational challenges for owner-operators after the ELD mandate]

ATRI came down in its conclusions in favor of roadside-sign use, "given that most drivers find VMS to be accurate."  Yet the organization also stressed implementation of a "more standardized and sophisticated information push system ... available in the cab" could render signs obsolete in future.

For now, ATRI recommended expanding the use of variable message signs, noting they "should be standardized for all rest stops, both public and private, on major thoroughfares." 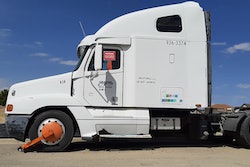