For the second year in a row, however this year in a different truck, Bradley Wacks’ Army-Air Force Exchange rig picked up People’s Choice honors at Overdrive‘s Pride & Polish at the Great American Trucking Show in Dallas.

Wacks’ truck this year is a 2019 Freightliner Cascadia with a 2018 Hyundai van that features American flag and bald eagle graphics on the cab and flag and military tribute graphics on the trailer. Last year, Wacks showed a 2016 International with patriotic graphics.

Best of Show winners were announced in five categories during the show – working bobtail, working combo, limited-mileage bobtail, limited-mileage combo and builders class – along with the People’s Choice winner in a ceremony held at GATS on Aug. 25.

Picking up Best of Show in the Limited Mileage Bobtail category was the 2018 Peterbilt 389 owned by Daniel Gil and Alonza Ramirez out of Hobbs, New Mexico.

Jeff Jansen and V-Max Transportation out of Zeeland, Michigan earned Best of Show in the Limited Mileage Combo category with “Backlash,” their 1995 Kenworth W900L and 2016 Utility van.

Randy Manning’s “Beast of Burden,” a 2018 Kenworth W900L dump, was the top finisher in the Builder’s Class category. Manning is based out of Cross Junction, Virginia.

In the Best of Show Working Bobtail category, Kaleb Hammett and Hammett Excavation picked up top honors with his 2017 Peterbilt 389.

Finally, Robbie Basse, the owner of Basse Transportation out of Hinton, Oklahoma, earned Best of Show in the Working Combo category with “Baby Blue,” his 2016 Kenworth W900 and 2016 Fontaine Infinity flatbed. The flatbed deck, used in Basse’s daily business, is polished aluminum. 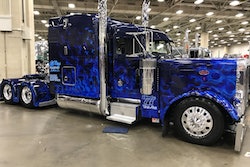 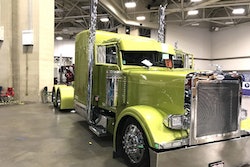 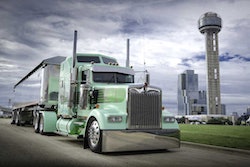