After a long search and some wheeling and dealing, followed by a five-year restoration process that was completed in 2011, the truck is now also a champion, being crowned this fall by Overdrive readers as the 2022 Overdrive’s Pride & Polish winner in the Antique category.

Bridgman, Michigan-based Wasko was the second owner of the rig back then. The original owner got cancer and sold it to Wasko, but after being involved in a crash in 1979, Wasko had to sell the truck to keep his business going.

“We took it to Hill Truck Sales [now Truck Centers, Inc.] in South Bend, Indiana,” said Gerald’s son, Gary, who now runs the 12-truck Wasko business. The shop told Gerald that because the truck was a Powerliner, and only around 500 were made between 1971 and 1979, the parts to repair the truck were not readily available and would have to be made, putting the repair time around six to eight months.

With four children at home and the truck being his only source of income, he couldn’t wait for it to be repaired, so he sold it to Hill and bought another truck the next week.

As time went on, Gerald’s children grew up and got into the business, from driving to now running the company.

“Me and my brother and sister run the office,” Gary said. “[The company] just got bigger. As time went on, I rebuilt some tractors, and I told my brother we need that old truck back. It’s unique. There were only so many made.”

After some searching, including making flyers to post around the Bridgman area around the late-90s, Gary eventually located the truck at the Belle Way Trucks repair shop in South Bend. It had a different paint scheme, but it was the same truck. A deal couldn’t be reached back then, and the truck was once again lost.

Some years later, after seeing the truck running locally along U.S. 12, Gary again got the itch to find and attempt to buy the rig. He knew a farmer owned it, so he got flyers out to the granaries in the area.

“Lo and behold… we ended up getting ahold of this truck, and the guy who owned it blew [the engine],” Gary said. “It was sitting at this Belle Way garage again, blown up.”

It sat there for about four years before the owner at the time told them to get an engine in it to get it back to him.

“He had it back, and I found it in his yard,” Gary said. “I went and looked at it and knew it was ours. We had put some special lights under the dash, and they were still there. I talked to this guy about trying to buy it, and he wouldn’t talk.”

Finally, in 2006 after two to three years of talking and finding people who knew the owner, Gerald and a friend went and talked to the owner. Finally, he agreed to sell it, making the Waskos the second and now fifth owners of the rig.

“Once I had power, then I started tearing it apart,” Gary added.

He cut the frame and stretched it, using the frame from a wrecked 1996 conventional Freightliner that he had on his yard. “I cut the frame on that, kept the tandem, and welded the frame together. So, I had a new, up-to-date suspension.”

The biggest mechanical upgrade came when the team swapped the steering to rack-and-pinion. Gary also upgraded the transmission to a newer box to be smoother and quieter.

The newer engine that was in the truck when the Waskos bought it, while still a Detroit V12, was a twin turbo rather than the original air-aspirated engine. “When this guy blew it up, he bought one that was a twin turbo,” Gary said. “It’s got more power than it had originally.”

Gary said the original engine put out about 475 horsepower. This one, Detroit told him, pushes around 600.

Gary also made sure that any replacement parts he used during the restoration were genuine Freightliner. The original truck didn’t have air intakes because it had a frontal air system through the White Freightliner emblem, but with the bigger engine, Gary said it “didn’t work out well.” He put the two intakes on the back of the cab, and also used Freightliner stacks and stack brackets, among other parts. “They’re a newer version, but they’re still Freightliner and not aftermarket stuff.”

The fuel tanks are original except for the smaller one on the left side, which Gary added with the intent of using the truck to haul sand. However, by the time he finished the truck’s restoration in 2011, the sand company had closed. It was no longer needed.

“I got the PTO on it, but I never hooked the pump up on it, and the tank is on it for oil,” but it wasn’t ever needed either, he said.

The only part of the restoration that the Waskos and friends didn’t do themselves was the new paint scheme, which was done by Hill Truck Sales. The truck was originally green, gold and white, but the scheme he chose for the restoration was a scheme that Freightliner used in the 1980s.

Because the truck mostly worked in farming operations after Gerald sold it in 1979, it hasn’t racked up many miles. Even today, with Wasko running it part-time during the summer months, it only has around 485,000 miles on it in its entire history.

“It sat at Belle Way for four years over there, and this farmer only used it driving a mile from his house to the granary, so it never went anywhere,” Gary said.

“Most of what we do right now is going to be van work, Conestoga, step deck,” Gary said.

There are several robotics companies near Bridgman, and the Wasko fleet hauls a lot of their specialty high-value freight to California, Reno and other places. “We’ve been hauling to Tesla quite a lot,” Gary noted.

The company also has some low boy trailers and dump trailers. While the sand business was still active, they ran three sets of “Michigan trains,” which can gross 160,000 pounds on state roads. 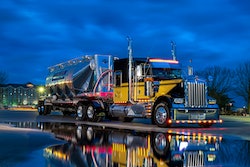