Previously in the CSA’s Data Trail “Crashes and interventions” installment: “The fault handicap”

The passenger-carrying world got one heck of a Valentine from the Federal Motor Carrier Safety Administration this year with the Feb. 14 announcement of new efforts to intervene with a group of a couple hundred bus companies it’d deemed “high risk.” The agency would be deploying teams on a “national safety sweep.”

Those “quick strike” teams’ training concluded in early April, and the sweep is well under way. The agency reported early results of “Operation Quick Strike,” their terminology for the sweep, in a press release issued May 2. The operation had shut down three bus fleets after its deployment of 50 specially trained safety investigators targeting “high-risk passenger carriers.”

“We are committed to taking unsafe bus companies off the road,” said U.S. Transportation Secretary Ray LaHood. “We will take swift action against companies that ignore our federal safety regulations.”

An FMCSA official speaking on background made note that truck fleets could be certain that lessons learned from the experience also would be applied to them – and sooner than later.

Agency Transportation Specialist Courtney Stevenson outlined the parameters that define “high-risk” carriers relative to the Compliance, Safety, Accountability compliance ranking system for  attendees of the Commercial Vehicle Safety Alliance workshop April 22 in Louisville, Ky. “FMCSA has a congressional mandate that we investigate high-risk motor carriers,” she said. A high-risk carrier is one “that has a Crash or Hours of Service or Unsafe Driving [Behavioral Analysis and Safety Improvement Category, or BASIC, ranking] greater than 85, plus another BASIC” above the intervention/alert threshold. And, she added, “any company with four or more BASICs” above threshold is also considered high-risk.

Given that 14 percent of all independent owner-operators show at least one ranking in a BASIC in the CSA Safety Measurement System and the average owner-operator ranking in the Unsafe Driving BASIC is 91, well above both the intervention and high-risk threshold, and 73 in Hours of Service (also above intervention threshold), FMCSA could have their work cut out for them if and when “Quick Strike” moves into the trucking world. (Get comprehensive data on inspection/scoring in carrier size groupings for all segments in this story from March 2013.)

Do everything in your power to avoid traffic and inspection violations to keep scores either nonexistent or low.

Next up in the “Crashes and interventions” installment of the CSA’s Data Trail series: “CSA’s Crash Flaw.” 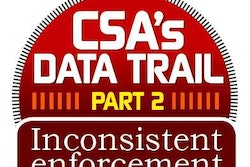