A federal district court on Thursday issued a ruling that prevents California from enforcing its new A.B. 5 law on motor carriers and owner-operators, meaning that the trucking industry is exempt from the law until a lawsuit brought by the California Trucking Association (CTA) can be tried.

Judge Roger Benitez, of U.S. District Court in Southern California, made the decision three days after hearing oral arguments from CTA and the state of California. CTA sued the state in November over the A.B. 5 law. Joining them in the lawsuit are two independent owner-operators, Ravinder Singh and Thomas Odom. The trio is hoping to see the federal courts exempt trucking from the law on a permanent basis.

While that litigation played out, however, CTA asked the court to issue an injunction that blocked enforcement of the law on motor carriers until the courts can make a decision in the larger lawsuit.

A.B. 5 took effect Jan. 1, but Benitez issued a last-minute restraining order Dec. 31 to temporarily block enforcement of A.B. 5 on trucking. He then heard arguments Monday, Jan. 13, from both sides of the case as to whether he should issue a longer injunction against the law until the lawsuit can be heard and adjudicated. Thursday, he sided with CTA, Singh and Odom, granting their request to put a stay of enforcement on the law pending the ongoing lawsuit.

The ruling is expected to be appealed to the 9th Circuit Court of Appeals, which would then decide whether to keep the injunction in place while the lawsuit is heard at the District Court level.

Benitez cited key questions in the lawsuit — like whether the state of California impeded on the federal government’s role in regulating interstate trucking companies — and the little harm to defendants California and the Teamsters in granting the motion.

CTA and the owner-operator plaintiffs contend that the 1994 Federal Aviation Administration Authorization Act (FAAAA or F4A) bars states from enacting laws that interfere with “routes, prices and services” of motor carriers. Benitez seemingly agrees with the plaintiff’s assertions that federal law prohibits states from enacting laws like A.B. 5, stating it as a reason for granting the motion.

“With A.B. 5, California runs off the road and into the preemption ditch of the FAAAA,” he writes in Thursday’s decision. “There is little question that the State of California has encroached on Congress’ territory by eliminating motor carriers’ choice to use independent contractor drivers, a choice at the very heart of interstate trucking. In so doing, California disregards Congress’ intent to deregulate interstate trucking, instead adopting a law that produces the patchwork of state regulations Congress sought to prevent.” 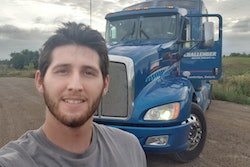