Countless fleets around the nation have risen from the base of a solid owner-operator business. While our cover feature this month looked at a variety of non-driving roles that operators often assume for, likewise, a variety of reasons as they move through a career in trucking, one of the more common moves for a savvy independent is, of course, fleet expansion.

A week or so back I paid a visit to the HQ of Old Time Express, a 20-or-so-truck fleet in Hartsville, Tenn. I’ve been familiar with Old Time since slightly before this time last year, when I first spoke with Mark White, son of the fleet’s founder and current manager of operations, about a 2012 audit that saw the fleet’s safety rating downgraded to Conditional. I wrote about that, regular readers will remember, as part of the CSA’s Fallout series this past year — the series is still ongoing with close looks at various state enforcement departments, concluding next month with Ohio.

This time around, I met fleet founder and former owner-operator Bo White, who joked when I showed up that he had a trucking company he’d sell me if I had $32 in my pocket. Taking a look at the fleet’s shop building, built around the year 2000 and run today by Mark’s brother Mitch, pictured, Bo White told me the story behind the fleet’s founding, also on offer in miniature on an old racecar bumper fastened to one of the building’s rafters.

From the base of that shipper, Old Time grew into the next decade, specializing in the lane between their Nashville-area headquarters and Michigan, when Sport Rack went out of business diversifying lanes around the Midwest and elsewhere and securing some direct freight in and around Hartsville.

Mark White was part of that transition as a driver and owner-operator, to one degree or another, he says, but he initially filled another role. “When my dad first hired me” a few years into the relationship with Sport Rack, “he had five or six owner-operators, maybe one company truck,” Mark says. “He’d had issues with the one person in the office, and he needed help.”

Mark left his job to come into the office, Mitch likewise joining him around the same time. “I took a pay cut to go work for him,” the “hometown discount,” Mark says, but bought a truck to supplement his income. “I bought a wrecked truck and worked on it nights and weekends,” then putting it into service with a driver in the fleet. “After some serious burnout, I went to work with the post office and was delivering mail.”

But Mark wouldn’t, ultimately, get away from the trucking bug. His P.O. routes “took me on a route on Saturdays that went out by I-40, and I’d see the trucks going by,” he says.

That led to, of course, another truck — “in 2001, I bought another truck and started driving it myself.” Mark still does drive occasionally, he says, and now owns three of Old Time’s company trucks, technically leased to Old Time Express, but he’s fallen solidly into the operations role in the office, managing the day to day of the business.

Having been on the operations side of things when he started with his father’s business has “made me more mindful to commitments to customers,” he says. Having also been a driver, “on the operations side you’re more in tune with what drivers are actually dealing with. You’re conscious of what they’re going through and you’re sympathethic to it.”

Your B.S. meter, when needed, is “also more finely tuned.”

As for Mark’s brother Mitch, he’s been on the maintenance side of the operation, among other areas, since the beginning, “I started working with dad right when he started the business in 1994,” he says. “I left for about six months and came back in 1995 and have been here ever since.”

He got his CDL right when he hit 21, following that time, and says that “all I ever wanted to do was drive, but then I got married, had kids and changed my mind about that.”

He’s done dispatching, hiring and firing, and says they’d always had someone in the shop dedicated to maintenance. “I would oversee it, but I never stayed in the shop,” he adds. “Earlier this year, though, we decided to move me down to the shop to get a tighter grip on what’s going on and manage it.”

While Mark and Mitch both love to be out on the road driving, “we realize we’re needed here,” Mitch says. “It makes no since to be out in the truck and hire somebody else to run the family business” from the office side.

Mark is the proud father of three daughters, while Mitch’s four boys “have all worked in the shop,” representing the potential third generation for Old Time Express. “The youngest three are working here on Saturdays” after many of the company trucks come in for the weekend. “We’ll open then and run them through, service them. The boys [18, 15 and 13] can pull them in, pull them out – they help sweep and do different things around the shop.”

While a family business is certainly not the only way to start and/or run a small fleet, it is one of the most common. Mark and Mitch today both draw a salary, says Mark. “On top of that, he owns a truck, and I own a couple trucks, so we draw checks off of what revenue those trucks bring in. My personal goal is to get to five trucks and stop taking a salary. I don’t want to feel like I’m a burden on the company.”

Mark, echoing his father’s facetious offer to sell the company, says in terms of income that “I would probably generate more dollars if I just owned one truck and ran it myself.” But he’s grown to love doing what he does “on the operations side. I love the way trucking companies operate, the whole deal. It’s problem solving. A lot of people freak out when the s*** hits the fan, so to speak, but I enjoy dealing with it.”

When he was a kid, his father drove, and Mark “never resented him for it,” he says, holding a “healthy respect for his need to make the hard decision to leave home to provide for me and my brothers.” With two teenage daughters and a really young daughter of his own at home, Mark realizes the value of the office position ever more. “I can make a living and still do the things with my girls that I want and need to do.”

Gonna be a beauty of an International Transtar (1970s) once Old Time puts the work in!

There are no doubt trade-offs, says Mitch: “It’s hard to work for family sometimes. You’ve got to have a certain knack for it. There’s times we’ve wanted to shoot each other, but we eventually all come together and get it worked out. At holidays or at night, if we’re together for whatever reason, it’s hard to keep work separated from family time.”

Working together, having driven and holding intimate knowledge of all aspects of the business “learned the hard way,” Mark says, in practice, “we’ve gained some valuable lessons we’ve been able to pass along.”

Here’s a sincere hope Old Time rolls on for years to come. Find more about the company’s move to e-logs following being trapped with a Conditional rating in this linked feature from the CSA’s Fallout series, and page through the gallery below for images from the recent shop visit. In addition to the Whites, also pictured in the photos are Old Time maintenance personnel Brandon Moore (black hat), at work cleaning out an electrical connection to restore bright-light functionality on an operating truck, and John Brown (blue hat), who installed a new drain tube to the shop’s waste oil catch basin; a pump installed in the basin sends the oil to an exterior holding tank — Old Time then uses it to heat the shop this time of year.) 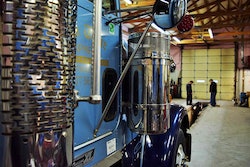 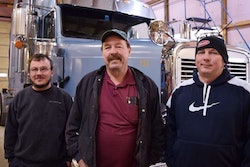