Attendant to the Aaron Tippin/Tony Justice recording session I wrote about a week or two back, I had the rare opportunity to see Big Rig Videos’ Chris Fiffie at work in person. The day after the Wednesday session in Nashville, Fiffie, Justice and Tippin regrouped at the North Cumberland Regional Airport near Cookeville, where Tippin was scheduled that day to take his wife on her first flight-training session in a Piper Cub aircraft he utilizes for such purposes. (It’s also one among several older airplanes he keeps at the airport.) In the video above, Fiffie runs through the purpose of his own trip from his native Florida to the Nashville area that week, getting footage for what will be an eventual music video for the Tippin-Justice duet on “Brothers of the Highway,” the track they’d just recorded.

Fiffie then worked his magic capturing footage of Tippin and Justice behind the wheel, as well as plenty on-the-road camera work. If you’ve not been a fly on the wall for what Fiffie’s been up to the last few years with his Rolling CB Interviews with operators and so much else, run through our playlist of some of his work at the bottom of this post. As have been many readers, no doubt, I know I’ve been a big admirer of his work to date — it was great being on hand to see him go to work.

Catch more from the day via the pictures below as well. 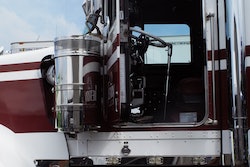