Things have been going swimmingly for singer-songwriter and ETI Transport driver Tony Justice since we last checked with him in December with that month’s cover story and associated coverage. Mostly: trucking trucking trucking with the Greeneville, Tenn.-based small fleet. But the new record, Apple Pie Moonshine, has long since made its way into the truckstops — all the major chains as well as some independents, and sales are well, Justice says.

Meantime, short filmmaker and former lowboy hauler Christopher Fiffie, who makes vids of various show trucks as well as profiles of working drivers, rode along beside Justice with his crew on a haul or two and interviewed him in part over the CB radio. Fiffie’s work combines rolling shots and other footage with interviews and music as well, a perfect fit for Justice as a subject. You can take a look at it below.

In the vid, as Justice likewise told me yesterday, he notes some of his activities coming up at the big show in Louisville later this month. He’ll be hanging out through the show with the folks at Blue Tiger, and he’s also playing as part of the Saturday show out in the Papa John’s parking lot. Get out there and give it all a listen.

Also, if you missed Max Heine’s Overdrive Extra post earlier this week about Parker Millsap’s “Truck Stop Gospel” track and new album, check it out here. There, Heine also calls out the singers and pickers and players among you:

How about any driver-musicians out there who can bring their own road-worn experience to a performance? Overdrive is considering a driver music contest and we’re looking to hear from aspiring singers. Let us know if you’d be interested in competing. And if you’ve got an audio or video clip, or link to one, send it: mheine@randallreilly.com.

Take it under advisement. 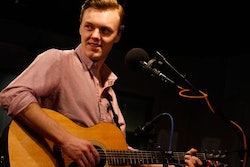