All in the family: Joel Dawes’ ’88 Pete represents three generations

Owner-operator Joel Dawes says the creation of his 1988 Peterbilt 379 was a family affair. Dawes came up with the green and white paint scheme with the help of his son and father.

The generational trio chose white as the base color to represent honesty and purity, making it a model for their small fleet. The green stripes represent Dawes’ son and his dad, standing for the color of two of the family’s Camaros: One a 2011 that his son hopes to drive when he turns 16, and the other a classic ’68 owned by the older Dawes that was gifted to him by his stepfather.

“Everybody has the reds and blacks and blues,” Dawes says of the other trucks on the show circuit. “We wanted to stand out.”

In April at the 75 Chrome Shop Show in Wildwood, Fla., the truck picked up its second Overdrive’s Pride & Polish Best of Show win in the Working Bobtail category, following up a Best of Show win from the Fitzgerald Truck Show last fall.

With the win, the truck now will compete in the Pride & Polish National Championship in August at The Great American Trucking Show in Dallas.

Dawes’ small fleet hauls meat and cheese from Michigan and Wisconsin to Florida, returning to the northern states with cheese and produce. 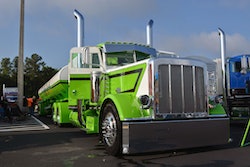 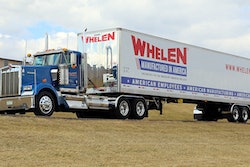 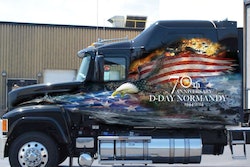 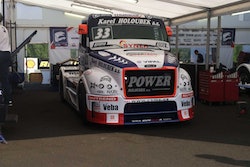 Videos: Behind the scenes, in the pits in European race circuit