In August 2020, the Federal Motor Carrier Safety Administration opened the comment period on a petition from the Owner-Operator Independent Drivers Association to improve broker transparency.

OOIDA’s petition requested that brokers provide transaction information automatically within 48 hours of the completion of contractual services and that brokers be prohibited from including any requirements that a carrier waives their rights to access the transaction records.

“49 CFR § 371.3 already requires that brokers keep records of each transaction with a carrier and that each party to the transaction has a right to view these records,” OOIDA said. “OOIDA’s recommendations to enhance compliance with § 371.3 are not attempts to control rates or impose burdensome requirements, but would simply ensure that motor carriers have access to documents they have the right to view.”

Following OOIDA’s petition, in October 2020, FMCSA held a listening session pertaining to broker issues. Then, in November 2020, the agency opened the comment period on a petition from the Transportation Intermediaries Association to eliminate 49 CFR 371.3(c) concerning the rights of parties to a brokered transaction to review the records of the transaction, including the shipper's rate paid on the load.

[Related: Listen back: Truckers, brokers sound off in transaction-transparency session]

On Wednesday, OOIDA penned a letter to FMCSA asking for an update on the broker transparency regulations.

“It has been over two years since OOIDA submitted its original petition, 20 months since the most recent comment period ended for broker transparency-related dockets, and nearly 1,500 comments have been filed” on the various dockets from the petitions above, OOIDA said. “For that reason, we believe an update is warranted on where the agency stands on our outstanding petition and related comments from motor carriers.”

OOIDA added that it’s frustrating to truck drivers who took the time to comment, as “they feel as if their voices aren’t being heard or properly considered. Especially with regard to an issue involving transparency, FMCSA’s lack of public progress further undermines carriers’ confidence in a system that is supposed to protect them and be responsive to their legitimate and appropriately expressed concerns.”

Around the time of OOIDA's 2020 petition, and protests in Washington, D.C., related to the issue, Overdrive Radio dug into the issue in a series of episodes you can access via the following links:

“Same dealer retail sales of used Class 8 trucks popped in August, jumping 29% m/m,” said Steve Tam, Vice President at ACT Research. “Used truck sales usually see a nice bump between July and August, but the level of sales exceeded expectations. Harkening back to comments in a previous report, new truck production is the most likely catalyst for the out-sized increase.”

Tam noted that OEMs couldn’t maintain June’s level of output in July, so used truck sales in September are expected to fall.

“However, August new truck production was also elevated, so October used truck sales should see some meaningful gains,” he added. “For what it is worth, that basic pattern also follows historical seasonality, though this year is likely to see higher highs and lower lows, given ongoing constraints.”

The report from ACT provides data on the average selling price, miles and age based on a sample of industry data.

The alerts -- available through the Drivewyze Smart Roadway program -- are available to commercial truck drivers and will be active on all 564 miles of roadways managed by the Pennsylvania Turnpike Authority. Smart Roadways extends public transportation safety programs into the cabs of connected trucks throughout their road network.

Messages such as “Sudden Slowdown Ahead” and “Congestion Ahead” are displayed on ELDs that have the Drivewyze platform installed approximately two to three miles before the slowdown begins, giving truckers plenty of time to adjust their speed.

Congestion and incident information is sent in real-time to drivers and is provided by INRIX, which uses advanced algorithms to analyze millions of anonymous connected vehicles traveling more than a billion miles daily in the United States. 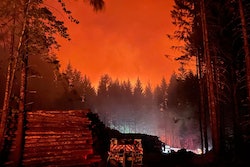